Boomerang Alliance is targeting the priority solutions that will make deep cuts in the amount of Australian plastic entering our marine environment. Australian’s consume over 3million tonnes of plastic each year (129kgs per person) – less than 10% is recycled. Of this 3million tonnes, we believe that between 90,000 – 120,000 tonnes of those plastics (3-4% of consumption) will end up in our waterways and along our coasts. The sources of these plastics can be found in the graph below. 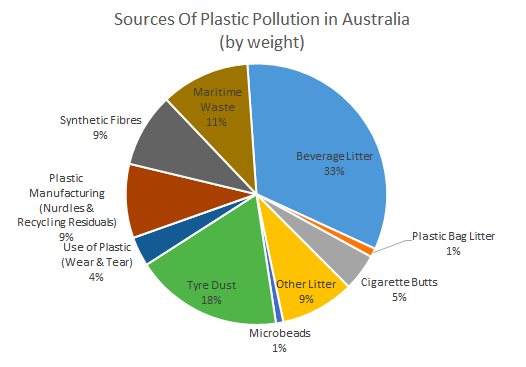 While most plastic does not end up in the marine environment (and most people don't litter) - the impact of what is polluting our environment is so severe that we must take strong action for all our benefit. Our campaign identifies 3 key pathways to target the most profligate and / or problematic plastics found in our marine environment. Our research indicates that we can readily eliminate 70% by weight (i.e. at least 53,000 tonnes p.a.) of the plastic that we dump into our oceans by 2020 by creating the right policy and regulatory framework and then tackle the remaining pollution.

Significant amounts of the plastic entering our marine environment comes from commercial and industrial activities which are already legally obliged to ensure their waste doesn’t escape their control – but still pollute. In fact, these types of activity make up as much as a third of all marine plastic pollution.

For example, in Australia we consume around 1.7million tonnes p.a. of plastic resin pellets and flake (commonly called nurdles; or mermaid's tears because of their devastating impact on marine life), which is used to make new plastic products. Our research indicates that around 1% of these nurdles are lost – spilt on the factory floor and swept down the drain; lost off the back of trucks while loading; or washed off ships while being imported into Australia. 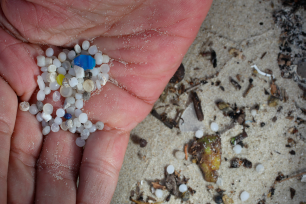 Nurdles are found on virtually every Australian beach

Despite the fact that it’s an offence in every state in Australia to allow waste to escape a business’s premises, we have found nurdles in the gutters and drains of virtually every plastics factory we have inspected. Similarly, studies for the Federal Government have identified that up to half the plastic bags entering the marine environment have blown off landfills and from waste facilities (an offence under existing regulations). Yet, to date, we have not found a single instance where an environmental regulator has issued a penalty notice or fine or required a pollution prevention plan.

Boomerang Alliance has undertaken inspections and surveillance across literally dozens of facilities and have found large quantities of plastics escaping in contravention of planning and environmental laws from: landfill facilities; plastic recycling factories; small businesses such as surfboard manufactures; and shipping which is also a significant polluter.

While we can’t expect that enforcing regulations will eliminate every instance of plastic pollution, there is around 25,000 tonnes per annum that can be immediately stopped simply by the environment protection regulators across Australia ensuring their own regulations are enforced.

Other Priorities: Ensure major shipping and commercial fishing operations operating in Australian waters prevent the disposal of nets and waste at sea.

2. Take it Back! Adopting Extended Producer Responsibility systems for the most common plastic products and packaging

Extended Producer Responsibility (EPR) is a policy adopted by many governments around the world, where the producers of products are required to ensure the post-consumer waste associated with their products. EPR schemes are most commonly used to address problem wastes and are often adopted to tackle the biggest sectors of the plastic industry.

In particular, EPR schemes often have take back requirements, where producers are required to operate a system to physically take back their waste products or packaging. An important feature of take back schemes is to apply a refundable deposit to the goods (or packaging) when sold to create a financial incentive for consumers to return their goods at the end of their productive life.

Container Deposit Schemes (CDS) are probably the best known EPR schemes – operating for over 40 years in some 40 jurisdictions across the world but can also extend to schemes to manage e-waste, packaging generally, end of life tyres, mattresses etc. Major Australian states are beginning to adopt CDS. 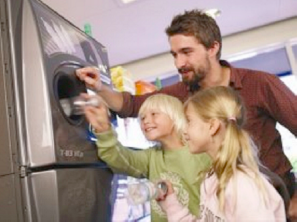 If every state in Australia were to simply adopt an effective and efficient CDS by 2020, we would reduce the amount of marine plastic pollution generated annually in Australia by around 30%. While it should be a no-brainer, over many years Boomerang Alliance has been engaged in an entrenched fight with big beverage producers like Coca Cola and Lion. 2017 is the tipping point for CDS, with NSW, QLD and the ACT expected to decide to join with South Australia and the Northern Territory.

Next in line are the recalcitrant states: Victoria, Western Australia and Tasmania who we are pushing to follow suit by 2020 or face national action.

At a broader level, the use of a deposit / refund scheme is an effective tool to ensure that producers value their products at the end of their life – imagine how many damaged fishing nets would no longer be discarded at sea if every net was sold with a $500 bond refunded when the net was returned? 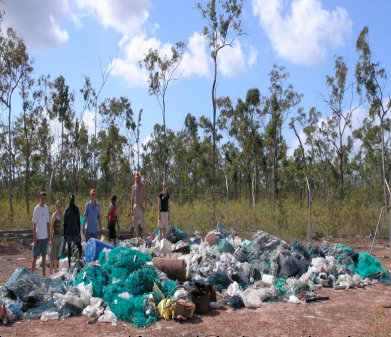 First Action(s): Ensure CDS systems are in force in NSW and the ACT; and announced in QLD by the end of 2017.

3. They Have to Go! Banning the plastic products that are simply unnecessary

Finally, while we need to recognise that while some plastic uses have produced important benefits, others create problems far beyond their benefits and simply cannot be effectively controlled. 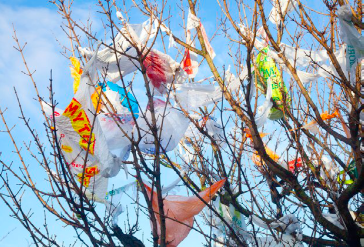 Examples of these include:

The answer is simple – they have to go! Governments should immediately ban the production or importation of single use plastic bags and personal care and cleaning products containing microbeads.

Other areas of the plastic consumption cycle that have no current viable solution (and like microbeads and bags are hardly ‘necessary’) include polystyrene packaging, synthetic fleeces and helium filled balloons – all of which are identified problems within the marine environment.

First Action(s): By the end of 2017 government(s) should ban the sale, production and importation of: