The rising tide of plastic pollution in our rivers and oceans is causing increasing worldwide concern. Did you know that the CSIRO recently completed a survey, which found that “three quarters of the rubbish along Australia’s coast is plastic”? Most it comes from Australian sources, not the high seas, with debris concentrated near cities.

While all plastic debris is dangerous to the environment, the threats escalate as plastic fragments into increasingly small pieces and enters the marine food chain – and, in turn, our diet. These microplastic pieces can be as small as 0.004 µm (a human hair is around 18 µm), and invisible to the naked eye. The biggest are 5mm in diameter. 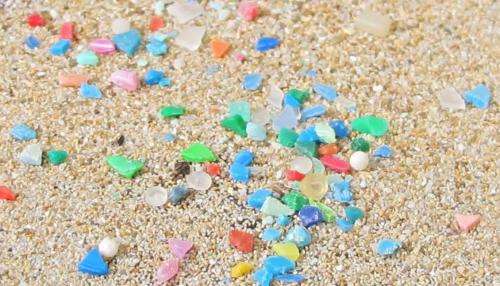 These tiny microplastic particles are often mistaken as food, and the latest research suggests that they are being ingested at very high levels. One recent study from the Great Barrier Reef found that "corals ate plastic at rates only slightly lower than their normal rate of feeding on marine plankton"; another study by CSIRO has found that “90% of seabirds around the world have ingested plastic”; and even plankton (the basis of the marine food chain) has been observed ingesting plastic.

The prevalence of microplastic being ingested by our sea life is a major concern which has rapidly become one of the major threats to marine biodiversity. Not only does this plastic cause starvation and poison species with the chemicals contained within the plastic itself, but microplastics are also known to be a toxic sponge sucking up any dangerous chemicals found in the surrounding ocean. A 2001 study by Japanese researchers found that plastic production pellets (the raw materials of plastic manufacturing) collected from coastal Japanese waters had accumulated toxins at concentrations up to a million times that found in the surrounding seawater.

So it really is time for all of us to act on microplastic pollution.

There are two types of microplastic pollution:

Primary microplastics which are tiny pieces of manufactured plastic like microbeads for use in facial cleansers, cosmetics, toothpaste, detergents and polishes and to some degree in medicine as vectors for drugs. They also include ‘nurdles’ the small plastic resin balls that are used to make all plastic products.

Secondary microplastics are the tiny plastic pieces that are derived from the breakup of larger plastic debris like bags and bottles. Over time, physical, biological, and chemical processes can reduce the structural integrity of plastic debris resulting in fragmentation.

We don’t yet understand the full impact of microplastics on marine ecosystems and the potential for longer term risks to human health but there is an emerging body of science demonstrating that the chemicals that accumulate in these plastics enters our food chain, with one scientist estimating “that people who consume average amounts of seafood are ingesting approximately 11,000 particles of plastic every year”.

As part of its campaign to cut 70% of the Australian plastic entering our oceans and waterways by 2020, Boomerang Alliance is calling for: