They’re tiny plastic microspheres measuring approximately the same size as a single human hair. So how does a pollutant barely visible to the naked eye present the greatest direct threat to the eco-welfare of oceans and marine wildlife? 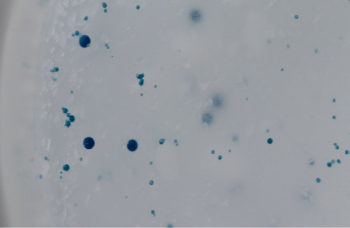 Generally made from polyethylene (but can be also be made of polypropylene (PP), polyethylene terephthalate (PET), polymethyl methacrylate (PMMA) and nylon), microbeads are commercially available in particle sizes from 10 µm to 1000 µm (1mm) in diameter. To give perspective on how small these microbeads are - a human hair is around 18 µm in diameter.

Making them virtually impossible to prevent washing down the plughole, through filtration systems in waste water treatment plants and facilities and passing freely into our waterways, coastline and oceans.

Like all plastics, micro and nano scale plastics have significant potential to act as a toxic sponge – sucking up organic pollutants and heavy metals to become a major vector for distributing toxic materials across the environment and importantly into our food chain. Which is why micro and nanoplastics are seen to be a more direct threat than plastics generally as they are easily mistaken for fish eggs, zooplankton and other sources of marine food, creating significant potential to pass through the food chain and onto our dinner plates.

Which is why microscopic plastic poses not only a catastrophic threat to ocean health - but to ours as well.

While virtually impossible to measure accurately the extent of the problem in Australian waters, a single tube of deep facial cleanser can contain 350,000 microbeads, demonstrating that the level of microbead pollution is substantial. Based on international estimates it is likely around 650 tonnes of microbeads enter Australia’s marine ecosystems annually. 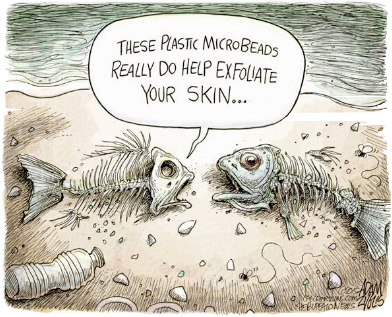 Based on their pervasiveness and size, microbeads are near impossible to remove from the natural environment, especially water.

As a result of high profile campaigns across the globe, nations including the US, UK, Canada, France, Ireland, Italy, Holland, Sweden, Taiwan and New Zealand have or plan to introduce various legislation prohibiting the manufacture and distribution of microbeads. Australia is yet to implement any such federal or state measure leaving us vulnerable to potentially becoming a dumping ground for surplus products.

In December 2015, former Federal Environment Minister Greg Hunt announced that state and territory governments had agreed to a voluntary phase-out of microbeads in cosmetics by July 1, 2018. In January 2016, Coles and Woolworth’s both announced they would stop using microbeads in their own products from 2017, while global companies including Unilever, Beiersdorf​, Johnson & Johnson and The Body Shop have already commenced the phase-out.

To date, 93 per cent of companies distributing and manufacturing in Australia have complied with the phase out. Leaving the remaining 7 per cent failing to move on the environmental issue and continue to pump microbeads into the biosphere.

A federal ban is the only way to safeguard Australian waters