Single-use coffee cups on the agenda

It is widely expected that harmonisation of bans on single-use plastics will be on the agenda when federal, state and territory environment ministers meet. Western Australia has announced it is banning plastics in coffee cups next year, with Queensland and South Australia considering a ban in the coming years.

"Over 1.8 billion disposable cups are used every year and virtually none are recycled; nor are there practical ways to achieve this. We need the environment ministers to agree on a pathway to make reusables, the primary option," said Jeff Angel, Director of the Boomerang Alliance of 55 NGOs.

Pip Kiernan, Chair of Clean Up Australia said, "The desire for change is enormous and we know our community supports the phasing out of these problematic and single use plastics. Every year more than 1 billion disposable coffee cups end up in landfill sites across Australia. We need a national approach to make impactful changes to reduce waste to landfill and provide Australians with options that are kinder on the environment."

Shane Cucow, Plastics Campaign Manager of the Australian Marine Conservation Society said: "Every year, over 100,000 marine animals are killed by the rising tide of plastic pollution. Australians love our oceans, yet most don't realise that even bioplastic cups and lids don't break down in the environment. These results show that Australians want plastic out of our coffees, and out of our oceans, before it's too late." 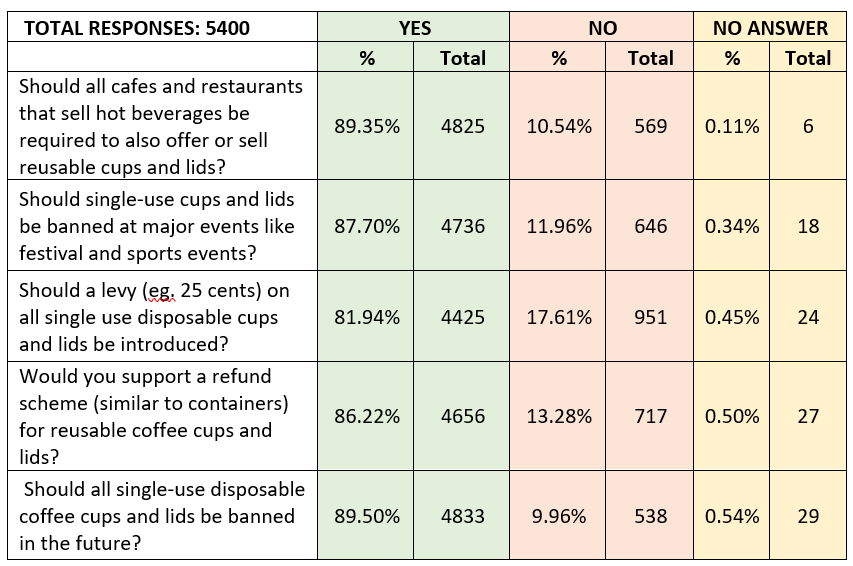