Major Supermarkets Must Switch to Only Reusable Bags 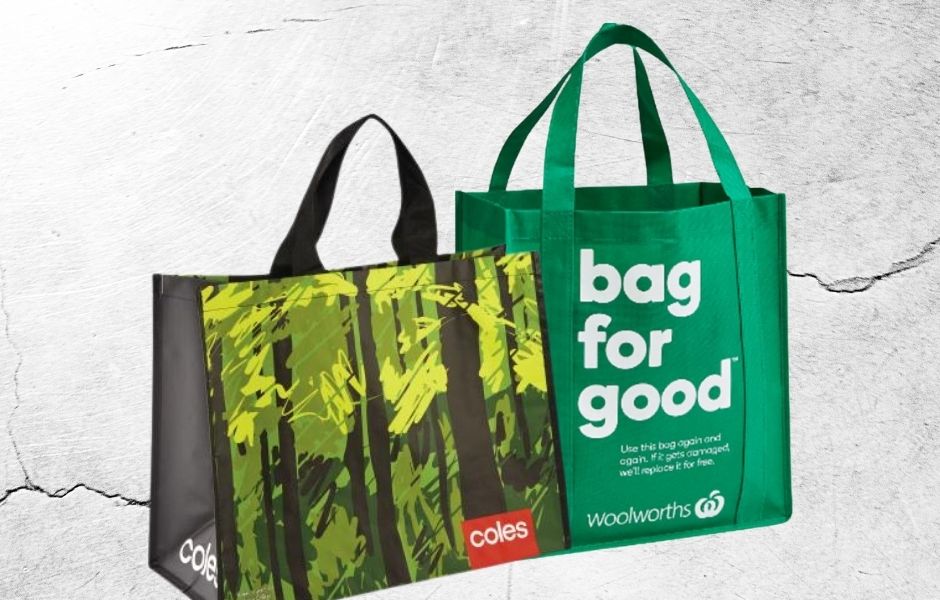 In the last two weeks both Coles and Woolworths have made announcements on future plans for heavyweight (approx. 55mcn) 15 cent plastic bags – which they have been claiming are reusable. Both bags have a high percent of recycled content. Over the last two years their positions on the bags have varied (we will ban; we won’t ban).

At the same time Boomerang has been pointing out that the bags were not reusable as they had not been tested against a credible benchmark, such as the Californian SB270 code. It requires a bag must be able to carry 10kg with 15litre volume capacity, over 50 metres, at least 125 times and be recyclable at end of use. The vast majority of the big supermarkets’ thicker bags were only used once or twice ending up as litter or in landfill.

Now at least there has been a partial breakthrough with Woolworths abandoning their heavyweight bags over the next 12 months, in favour of a range of options that include paper (single use), fabric and more durable plastic bags. However Coles will continue with the slightly thicker bag largely made using recycled and marine waste plastics. The Coles position is surprising given that some states are now moving to ban these heavyweight bags (WA is first off in July 2022).

Both are missing the opportunity to offer their customers a permanent solution, a solution that will meet customer needs and significantly reduce plastic waste and litter. That is the genuinely reusable shopping bag, rather than a single or very limited use bag made of any material including paper. From what the supermarkets are telling us between 70-80% of their customers already bring their own shopping bags. By only providing genuinely reusable bags in the future, that number should go well above 95% as consumers who ‘’forget’’ their reusable bag or shop on the spur of the moment adopt new behaviours (eg, always have access to a compact alternative foldable bag).

The Boomerang Alliance has put forward a proposal for a national Reusable Shopping Bag Standard, like the Californian code to stop the greenwash about reusability. Such bags should retail at a minimum $2, a price that will incentivise their continued reuse as a shopping bag. Both supermarkets potentially already carry such bags (eg ‘bag for good’) – subject to credible and transparent testing (as the Californian rule prescribes).

We have urged every State and Territory Government to regulate this issue as a national standard and adopt as soon as possible, and certainly by 2024.