The Great Barrier Reef is not only one of the wonders of the natural world, it supports 64,000 jobs in Queensland. But that natural wonder is under serious threat, not just from climate change, but also from plastic pollution.

"A study has shown that corals are actually absorbing microplastics on the Great Barrier Reef and dying, so it’s something that is a real problem for the reef," says Toby Hutcheon, the Queensland Manager of the waste and recycling action charity Boomerang Alliance. "If we keep on going with these single use plastics, and plastic pollution, there’ll be more plastic than fish in the oceans by 2050."

Research also suggests that up to 90 percent of seabirds have plastic in their stomachs.

Which is why the Boomerang Alliance have turned to the major coastal cities of Cairns and Townsville, which are this week becoming part of their Plastic Free Places campaign.

The campaign is centred on helping cafés and restaurants take single-use plastic items out of the food chain.

Plastic Free Places team members work with business owners to identify how they can replace plastic items such as straws, cutlery, cups, lids, plates and containers with reusable, biodegradable or recyclable alternatives.

It kicked off last year in Noosa, and in that city alone has removed over three million pieces of plastic from the environment.

Kel’s Kitchen and Brew Bar is one of the first Townsville businesses to take up the challenge, and owner Kelly Bolger says the move to sustainability is being warmly embraced. 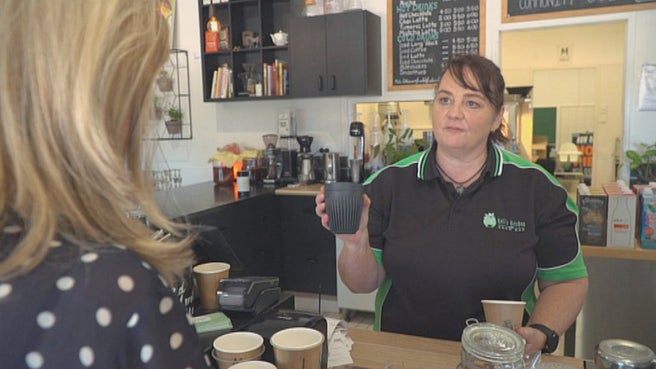 "The customers love it, the 50 cents off when they bring their reusable cup in, the stainless steel straws, loving that we do less packaging. I even have more and more customers coming in not wanting plastics."

The Queensland State Government is supporting the campaign, funding an effort to replace the use of single-use plastic in cafes and restaurants in the main population centres along the reef’s coast. And they’re hoping to make it state-wide.

One Cairns resident who’s been pushing for more action is 11-year-old Molly Steer, who two years ago launched the Straw No More project, which calls on individuals, businesses and schools to ditch plastic straws and educate others about the dangers of plastic which never breaks down.

Living alongside the reef means Molly has seen first hand the impact of plastic pollution.

"We need to start taking action because it’s still our choice to use alternatives and reuse things," Molly says.

"There is still time left but we need to start right now."

This article was originally published by 10Daily. See the video on the original article: https://10daily.com.au/shows/theproject/exclusive/a190924sqatg/cairns-and-townsville-become-plastic-free-places-to-try-to-save-the-reef-20190924