Fresh from their divisive Little Shop promotion, Coles are launching a new series of 'collectable' figurines, Stikeez - posing yet ANOTHER unnecessary plastic assault on the environment.

Made entirely of plastic (with no mention of recycled material) the 24-piece collection is themed around fruits and vegetables and is designed 'to encourage kids to eat healthy fresh produce', according to the retailer.

Including a potato, a carrot and a tomato, the 'irresistible' characters boast tiny arms and legs and are named the supermarket’s producers, including Marie the Mango, after Maris Piccone from the Northern Territory and Sunny the Strawberry after Sunny Ridge Strawberry Farm in Victoria.

And from Wednesday, February 13, customers can receive one free ‘Stikeez’ for every $30 spent in Coles stores.

Once again, the retailer has placed profit ahead of sustainability and seemed to have learned nothing whatsoever from the backlash they faced with the Little Shop fiasco. 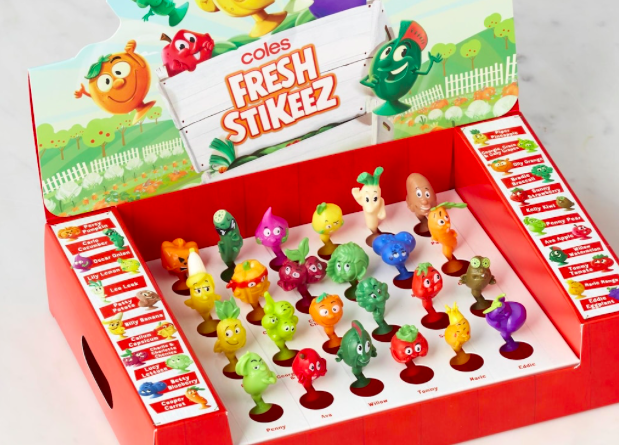 'Coles are using these so-called ‘collectables’ to bring consumers into their stores, with no regard for the environmental impact that this plastic tat will have as it heads for landfill,' said Jayne Paramor, deputy director of Boomerang Alliance.

'The fact that they have moved on to a new promotion just six months after the Little Shop was launched shows the lack of longevity that these promotions really have.  Rather than expanding on the previous campaign, which might have kept the Little Shop items out of the bin for longer, consumers are encouraged to ditch the last lot, which are now ‘old hat’ and move on to the new sets.'

And the environmental impact from the Little Shop promotion is undeniable.

'The toys turned up on beaches as far afield as Bali,' Jayne said. 'They weren’t recyclable (though their packaging supposedly was…) so they would have ended up going to landfill and if shoppers put the toys in their recycling bins, more than likely, the entire contents of the bin would have been ‘contaminated’ and sent straight to landfill, creating an even worse outcome.'

Jayne believes this was a missed opportunity by the retailer to enhance their environmental credentials by producing the toys from recycled plastic.

'Australia continues to struggle with the amount of plastic waste that we are producing, in the wake of the China ban in 2018, and while we are very good at collecting recyclable materials, we’re very bad at using recycled plastics in our products and packaging.

'Coles could have enhanced their environmental credentials by producing these toys from recycled plastics, creating demand and helping to drive the establishment of a domestic market for recycled materials, creating jobs and industry at home – it would have given consumers a ‘feel good’ factor and the backlash would have been significantly lessened!'