Dave West explains how planning for plastic can drastically reduce the amount of litter in high density locations entering the marine environment.

This week’s blog is broadly themed ‘planning for plastic’ because we want to bring a focus on our state and local government planning rules and development conditions and their role to ensure pollution generated on private property stays on that property and doesn’t contaminate our broader environment.

As we noted in last week’s blog, in every Australian jurisdiction there are laws to ensure industrial and waste facilities are obliged to ensure the plastic waste they generate does not escape into the environment – so it begs the question why don’t those sorts of provisions apply to other commercial activities? We’ve all been disgusted by the mess of litter strewn around hotels after closing hours or seen large entertainment precincts awash with garbage after a major event – surely any level of government agrees that it shouldn’t be allowed and if well planned, can be easily stopped.

Ironically, we can learn a lot about how to get it right from the regimes McDonalds have put in place over a decade or more via their partnership with our great friends and allies – Clean Up Australia. Make no mistake, McDonalds is a big presence within the litter stream, but if you look at their presence compared to their market share they outperform the other name brands by miles. Here’s a snap shot of some of the initiatives McDonalds demand of their franchises:

There is no question that large scale hospitality outlets and entertainment precincts are one of the largest generators of litter in Australia and the property managers of these types of operations continue to put their head in the sand.  We rate the Sydney Harbour Foreshore Authority (SHFA) as one of the worst litter managers we have seen in our 12 years of operation, so we confronted them about the problem some 18 months ago.  We presented them with a range of suggestions and many of their lead tenants (thankyou Sea Life) are actively lobbying them to clean up their act.  However despite promising improvements - Cockle Bay, Darling Harbour and Circular Quay all make our list of the 20 worst litter hots spots we’ve seen (and we’ve seen thousands of sites across Australia). Just metres away from the SHFA precincts are equally busy public spaces in Martin Place and Pitt Street Mall – run by Sydney City Council - and over a number of surveys the areas under Sydney City’s control show  the incidence of litter is some 80% less than at Darling Harbour and Circular Quay. 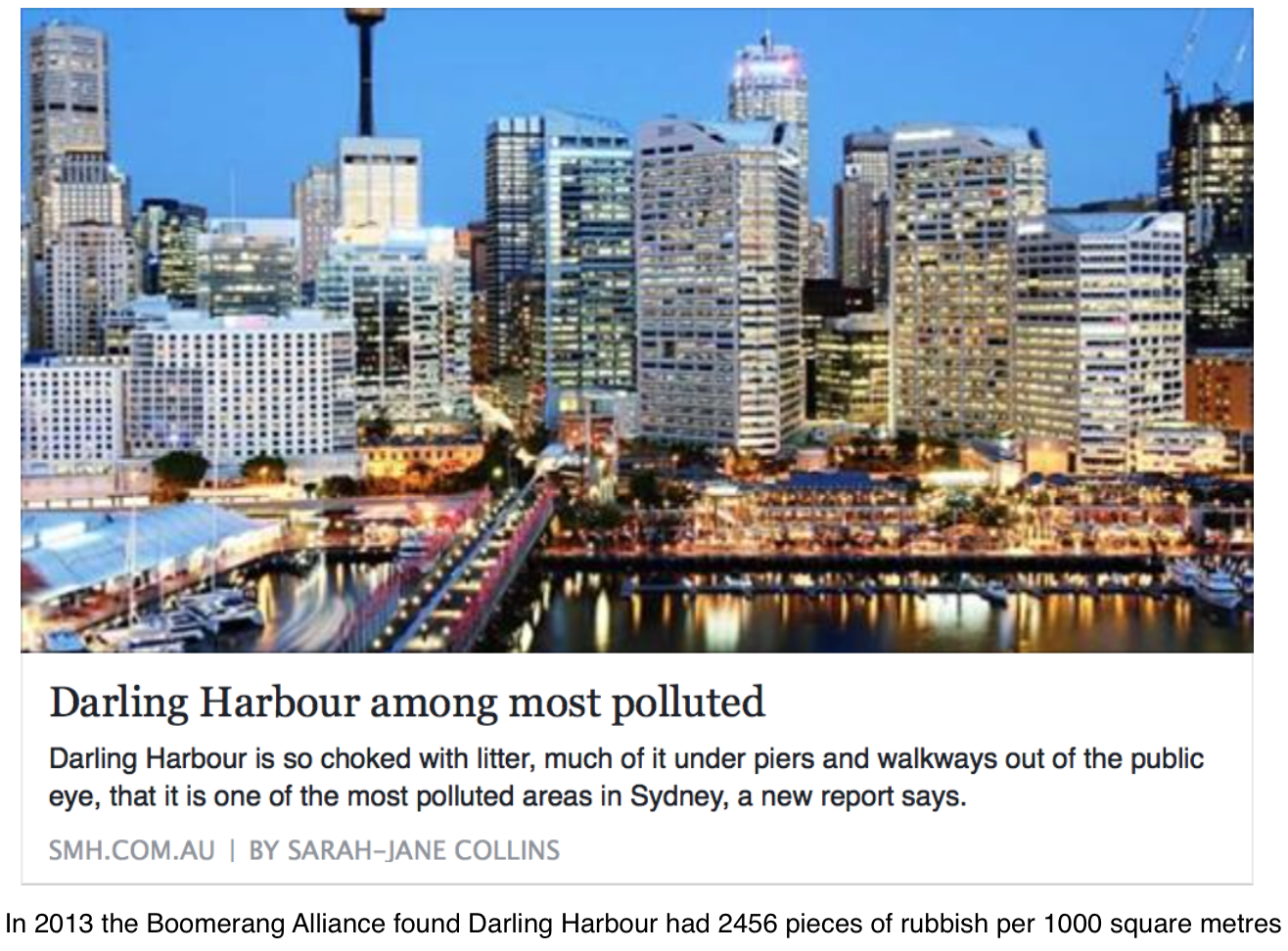 So how could we make this the new minimum standard for the hospitality sector, amusement parks and any large scale resort or venue near our waterfronts? Simple really, we create a regime that is part of the planning approval required before any development, rezoning or construction. That regime could be a simple checklist that outlines what these operations need to do to ensure they take responsibility for their pollution. Some of the things we think could be incorporated into a planning for plastics operation include:

So while its well and good that some responsible operators are making a huge effort to tackle their garbage the majority just keep sticking their head in the sand and their rubbish in our oceans – so it’s time to regulate and the simplest way to do that is via our state and local planning development and consent systems.

NB This is the last blog before we release our Threat Abatement Plan to cut Marine Plastic Pollution in Sydney next Thursday – we will be acknowledging the two State Environment Ministers who are leading the way – The Hon Mark Speakman (NSW) and the Hon Steven Miles (Qld) who will be joining their state, territory and federal colleagues at the COAG meeting for Environment Minister’s the next day. It’s an exciting time and signifies the point where we move from policy development and into the action phase.

We need your support and assistance to take on this massive undertaking - it’s pretty much the first holistic, national plan to tackle marine plastic pollution underpinned by concrete actions and timelines. We recognise that it’s a big task but are excited to lead our wonderful allies into the next phase.

Will you join us in this important work? Your DONATION will be a great help

Thanks to the 5,000 + people who have responded to our blogs and answered our polls – we’ll be continuing our blogs into 2017.

Wishing you a restful and enjoyable holiday season.