Throw away society? Take it back!

Recycling is not a new idea.  It’s been practised for centuries from composting to reusing discarded resources or refurbishing and repairing items.  But things changed during the 1950s and 60s when the combination of new materials such as plastic packaging and the throw-away society started to become dominant marketing forces.  As much as it repels those who support recycling, there was great excitement about having to use household items such as plastic plates and cutlery only once – and then throw them away!  ‘Much easier on the housewife too’, the advertising extolled.  And of course this spread to the outdoors where polluting litter exploded.

The resulting highly visible litter and failure to properly manage our waste started to become the driver for policy reform. There is a famous 1971 Keep America Beautiful advert depicting the way America’s landscape was being despoiled through the eyes of a native American as he peacefully canoes along his local waterway – take a look at The Crying Indian

But rather than simply focus more on litter clean ups, the community was outraged and started to ask itself - was this the only solution? What about the responsibility of the producer? Surprisingly to the many soft drink and confectionary manufacturers that funded the Keep America Beautiful campaign - the community wanted more action. As the problem got worse, with the replacement of refillable beverage containers with one-way throw away bottles and cans – the community and politicians started calling for the first container deposit systems which would become the pre-cursor for what would later become known as Extended Producer Responsibility (EPR) approaches to many of our problem wastes.

Australia was equally concerned, with the Australian Parliament’s Environment Committee investigating  ‘Deposits on Beverage Containers’ in 1974 because of the concern that:

"A growing proportion of beverage containers are 'throw-away or non-returnable. These products are conspicuous in litter and as such constitute a special disposal problem for municipal authorities charged with keeping our highways, shopping centres, streets and recreational areas free of visual pollution.”

In echoes of the debate we have seen rage in Australia, they assessed the environmental and resource costs and even undertook an early cost-benefit study.  They concluded drink bottles and cans should have a 5cent deposit and if not, should incur a tax of 3cents (with the funds to be used for recycling investigations and litter management by the CSIRO, local councils and community groups). Despite this early recommendation – nothing happened; reflecting Commonwealth inaction on waste we still experience today.

Oregon in 1971 and South Australia in 1977 led the way with their container deposit laws, and in Europe and North America many followed suit while also responding to other product sectors which were adopting the throw-away practise. Schemes were adopted to address used oil, cardboard packaging and newsprint; and in Europe a deposit was even introduced on end of life motor vehicles to stop illegal dumping.

EPR first appeared in the early 1980s in a few European Member States, especially for packaging waste. The EU (2014) defines EPR as, “an environmental policy approach in which a producer’s responsibility for a product is extended to the post-consumer stage of a product’s life cycle” and “In practice, EPR implies that producers take over the responsibility for collecting or taking back used goods and for sorting and treating for their eventual recycling. Such a responsibility may be merely financial or organisational as well.”[1] 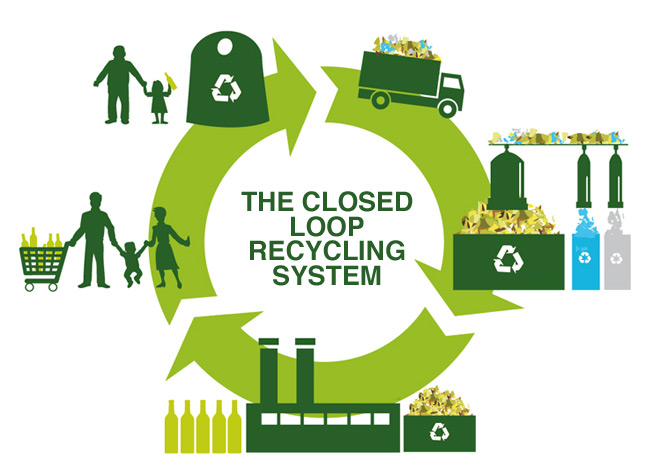 By adopting EPR schemes, the environmental costs of a product during its lifecycle was extended making producers responsible for the costs of collection and recycling, removing the burden from  local councils and ratepayers – thereby embedding the costs associated with waste and pollution into the market price of the products.  Over the years EPR approaches have continued to evolve with cradle to cradle product management and the circular economy adding to the imperative to close the loop and maximise resource recovery and recycling.

In more complex products some manufacturers even switched to ‘de-materialise’ which UNEP defines as “the reduction of total material and energy throughput of any product and service, and thus the limitation of its environmental impact.” Examples include Du Pont’s sales of titanium dioxide (used in painting cars), where Du Pont stopped selling their products and took over the management of car manufacturers ‘paint shops’ to better manage this dangerous material. Similarly in the early 2000’s Interface Carpets decided to dematerialise their products and lease carpet squares rather than sell rolls of carpet – an approach that saw individual squares exchanged when stained or offices simply wanted a new look, thus eliminating vast quantities of waste.

As the world advanced its waste management through EPR, Australia was being left behind and in 2004, our waste policy was in disarray. The Boomerang Alliance (and its then 13 member groups) called for EPR to be adopted in Australia, noting:

"Extended Producer Responsibility (EPR) provides the most effective framework for policy to transform the market towards zero waste, shifting from waste management to resource recovery, and internalising relevant costs for producers. EPR offers real opportunities for business to operate in sustainable and profitable ways in a changing political and consumer landscape; one where waste overload and litter pollution are increasingly unacceptable.”[2]

Australia eventually passed the Product Stewardship Act in 2011 which covers voluntary, coregulatory and mandatory approaches – but it has hardly been used (e-waste being the exception) and remains one of the weakest frameworks for EPR and product stewardship across the globe.

While all EPR schemes have their own common features, broadly EPR approaches can be grouped into 3 categories:

Despite EPR being, in theory, an individual obligation, in practice producers often exert this responsibility collectively. In collective schemes, a Producer Responsibility Organisation (PRO) is set up to implement the EPR principle on behalf of all the companies (the obligated industry). PROs potentially have three main functions:

Common to all EPR approaches is their financial contributions to help establish the infrastructure to recover resources, diverting them from landfill by creating strong incentives and in some cases, the motivation to take them back.  Importantly EPR creates an obligation on the originator of the polluting product to be a big part of the solution and ensure producers who manufacture goods that are likely to create waste do not enjoy a financial advantage over their more responsible competitors.  Thus, if an industry sector or individual business decides to introduce products that are intended to be easily discarded, or are unable to be recycled it either pays for the recovery or takes meaningful action to correct its failing. 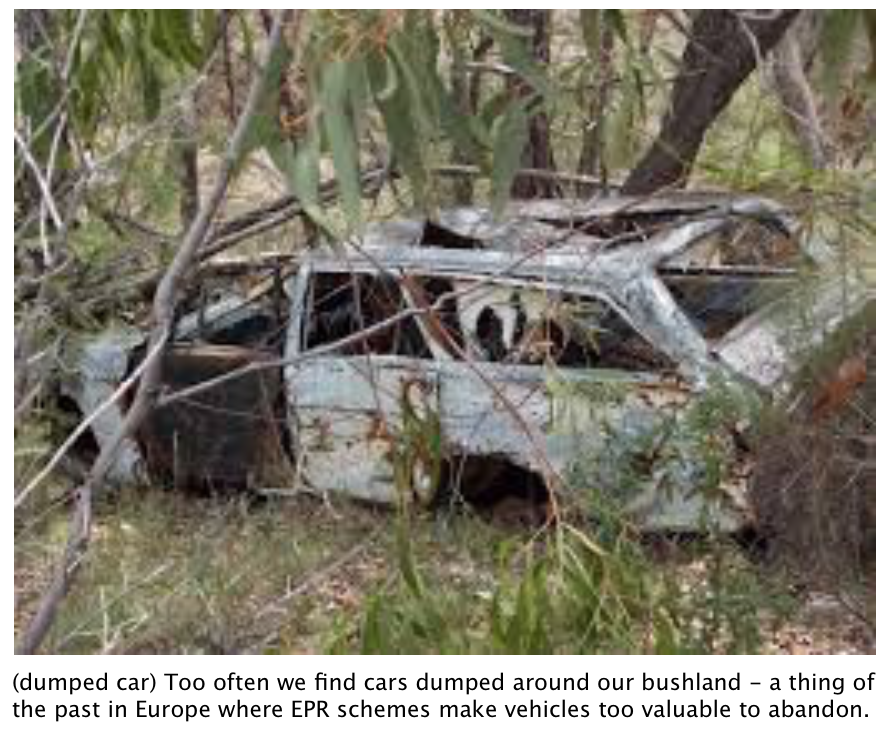 EPR schemes can be voluntary or mandatory – but it is essential there are regulatory frameworks to ensure there are no free riders (companies that enjoy a price advantage by not participating) to ensure a level playing field across the market.

Take Back schemes are generally mandatory schemes and tend to be deployed where the waste in question requires new approaches to collection, for example used chemical containers being recovered from farmers when replacement product is delivered or use a deposit / refund to  incentivise  consumers and others  to return drink bottles and cans to collection points for recycling.  Legislation requires industry to build the collection infrastructure (directly or via the appointment of an agent on their behalf), fund the cost of collection itself, and offer a specified refund. 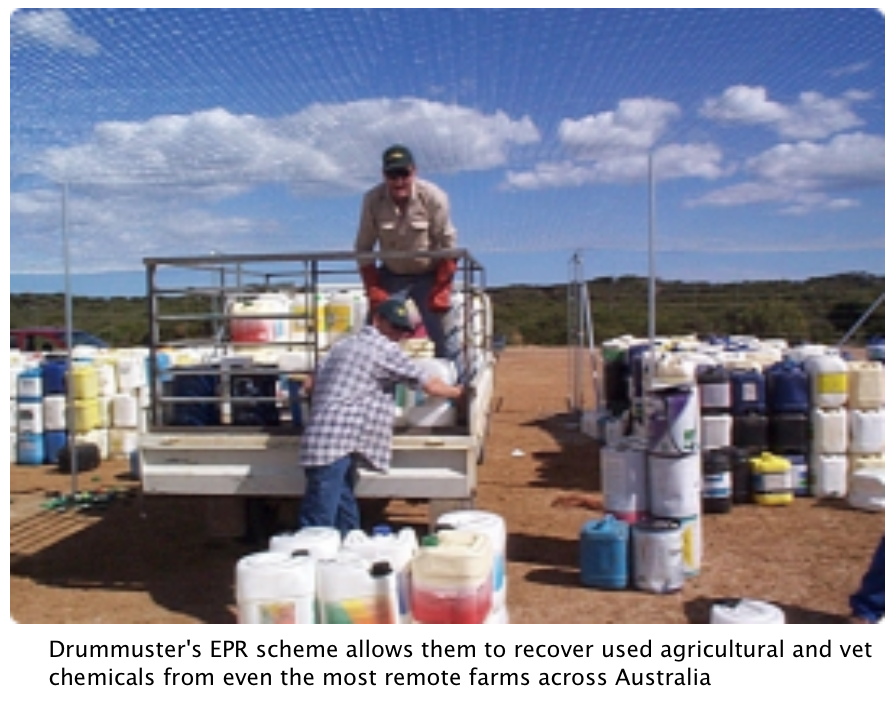 Examples of take back schemes operating in Australia include the CDS approaches (mandatory deposit refund) rolling out across Australia and the Drum Muster program (voluntary take back without a deposit/refund) which seeks to recover used vet and agricultural chemicals from agriculturalists.

Through the lens of Marine Plastic Pollution Boomerang Alliance recommends that take back schemes include:

An ADF is imposed on each item and requires producers to pay for the collection, transport and reprocessing of the waste but typically are applied to products that can be managed within the existing waste and recycling network.  Examples of ADF’s in Australia include: 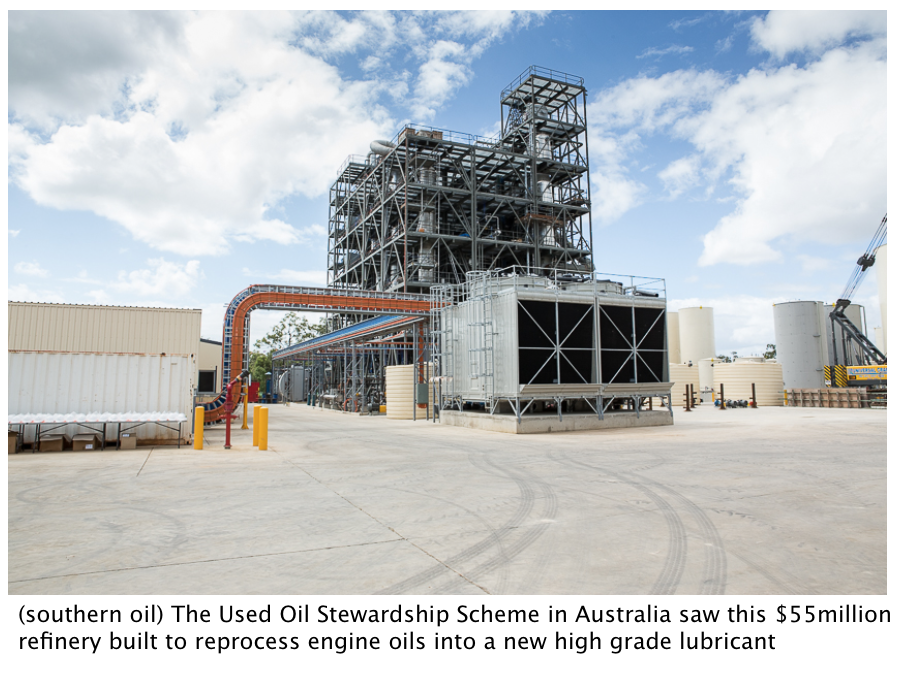 ADFs are limited in that they only work where the returning behaviour is high. To date this has not occurred with mobile phones, despite extensive public communication programs.

Boomerang Alliance recommends an ADF be placed on the following to reduce their incidence in the marine environment:

- Waste tyres (which currently contribute funds towards new recycling initiatives but fall short of providing the necessary funding to improve their collection and storage).

The third type is important in establishing product standards to either increase recycling or reduce waste and dangerous components. One common approach includes the provision of funding to creating a market for the collected material. By having recycled content targets, not only are the economics of recycling improved with a ready market for the material, but also the producers are diverted from using more and more virgin resources, helping to reduce the environmental footprint of their products.

Examples of this approach include the Publishers’ National Environment Bureau (which is one of the few voluntary schemes that don’t require any regulatory underpinning). This scheme fixes a minimum price for recovered newsprint and contractually obliges its members to use an amount of recyclate in its newspapers or magazines.

Boomerang Alliance recommends that mandatory product standard and design features be placed on the following to reduce their incidence in the marine environment:

There are also opportunities for Australia’s failed Packaging Covenant (previously used as an industry defence against bottle refund and bag ban laws) which could become useful by being updated to impose recycled content rules on producers and to establish design standards such as the use or prohibition of bio-plastics and standards prohibiting the inappropriate use of certain polymers.

It’s important that EPR schemes meet appropriate standards so they operate effectively, transparently and with credibility.  A copy of Boomerang Alliance’s 10 principles of product stewardship can be found here.

Clearly the adoption and use of EPR approaches is a cornerstone to any effective Threat Abatement Plan for MPP – that journey starts with Boomerang Alliance’s successful Cash for Containers Campaign which is ushering in drink container refunds and needs to be extended across (at the minimum) the 7 product categories discussed above . There’ll be a lot less plastic bottle pollution in our streets, parks and waterways – the single largest source of MPP.

EPR or taking back resources that were previously dumped and putting them back into the productive economy may be an old idea, but with growing volumes of waste being landfilled and the marine plastic pollution crisis - it’s even more relevant today.

By Jeff Angel and Dave West