The plastics that have to go - product bans

This week’s blog marks the point where our effort to develop a Threat Abatement Plan (TAP) for marine plastic pollution (MPP) switches from understanding the problem into concrete action on the most profligate and problematic sources of MPP. First up, we want to discuss those plastics that have to go – i.e. should be prohibited from import, manufacture, distribution or use in Australia. Those of us who work in MPP or are active cleaning up our parks, beaches and waterways are often frustrated by the fact we see the same problem plastic packaging or products every time we are out and about – water bottles, plastic bags, coffee cups, etc. so it’s hardly surprising that in surveying our supporters and allies’ opinions we discovered many want to ban, well, everything!

Below is a chart that highlights the % of people who want government intervention on various plastic items; 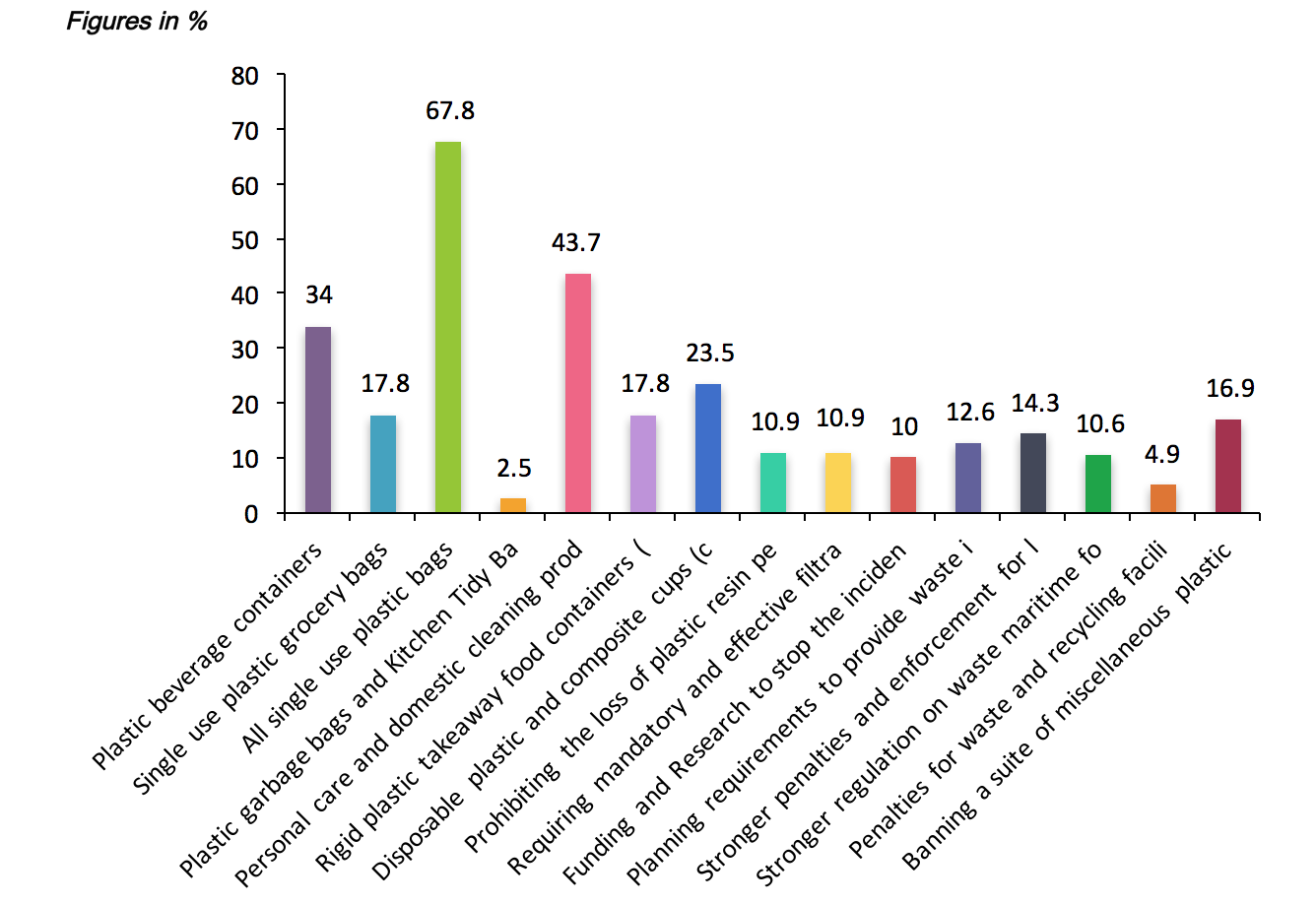 However, while wanting to be ambitious, we also need to account for today’s politics and economics. Some may wish to eliminate all plastics believing it would have a beneficial impact on our marine environment and sea life – it would also see the amount of food waste skyrocket and other dangerous alternatives may be introduced.  When intelligently used and integrated into waste minimisation and recycling programs, plastics deliver some big benefits.

Boomerang Alliance has identified both those plastics that are the most profligate within marine environments and/or are the plastic polymers and products that are the most problematic (i.e. most likely to be ingested, or toxic, or cause entanglement issues) as the priorities for government intervention.  These include:

The Most Profligate (the biggest sources of MPP):

I.Plastic Bottles: By far beverage containers are the single largest component of the litter stream and CSIRO has identified that between 35 – 50% all plastics found along our shorelines are sourced from the beverage sector. We estimate that (by weight) plastic beverage containers represent 33% of all MPP (and 50% of the total volume).

II.Tyre Dust: Surprisingly to many, tyre dust – the tiny specks of synthetic rubber that are abraded and left on our roads to ensure safe handling and braking - are most likely the second largest source of MPP (18% of the total weight) with 100% of this material eventually washed down our stormwater drains and into our seas.

III.Synthetic Fibres lost from clothing and textiles during washing are thought to be a major source of MPP. BA estimates they represent between 9-12% of all MPP and the largest source of primary microplastic entering our oceans.

The Most Problematic (i.e. most likely to directly impact marine biodiversity once they enter the marine environment):

I.Plastic Bags: While plastic bags are estimated to represent just 1-2% (by weight – 7-10% by volume) of all MPP they are one of the most problematic sources. Firstly, they are shown to be immediately targeted by species that mistake them for their food sources (e.g. jelly fish), fragment quickly due to their lightweight nature, and are often identified within entanglement threats (getting caught around marine mammals, turtles and sea birds).

II. Cigarette Butts: In total cigarette butts represent around 5% (by weight – 3% by volume) of all MPP and are virtually impossible to deal with once they enter the marine environment where they quickly break down into nano scale synthetic fibres.

III. Microbeads used in cosmetics, personal care, detergents and synthetic waxes and polishes are also a relatively small source of MPP (less than 1% by weight – 3-4% by volume), yet when washed into our sewer systems ensures 100% of microbeads will enter our oceans. Microbeads closely resemble fish eggs so are often targeted by marine species and are so small (ranging in size from 0.0004 to 1.24 mm) that they can be ingested by the base of the food chain - plankton and corals.

IV. Plastic Nurdles – the resin pellets and flake used to manufacture plastic products, which are often lost during transport, and handling and washed into our stormwater drains, are often mistaken for fish eggs.

V. Polystyrene Food Packaging – which fragments into individual beads quickly (increasing the likelihood of ingestion), are made from one of the most toxic monomers – styrene[1].There are concerns that, when heated, polystyrene food packaging has been shown to release styrene and other chemicals, while other sources suggest that packaging of such foods containing carotene (Vitamin A) or cooking oils must be avoided.

Having identified the above suite of plastics the next question is what should be banned as opposed to other policy mechanisms? We looked at a basic criterion to decide whether the purpose of the MPP is necessary. If so, is there an alternative or substitute non-polluting material? Second, we recognise that prohibiting a product or package has the potential to significantly impacts sectors of industry and so we next identified whether the plastic product could be effectively dealt with via an alternative like a take back scheme (e.g. CDS), another form of Extended Producer Responsibility (EPR) or traditional command and control style regulation. On this basis, we have concluded the following: 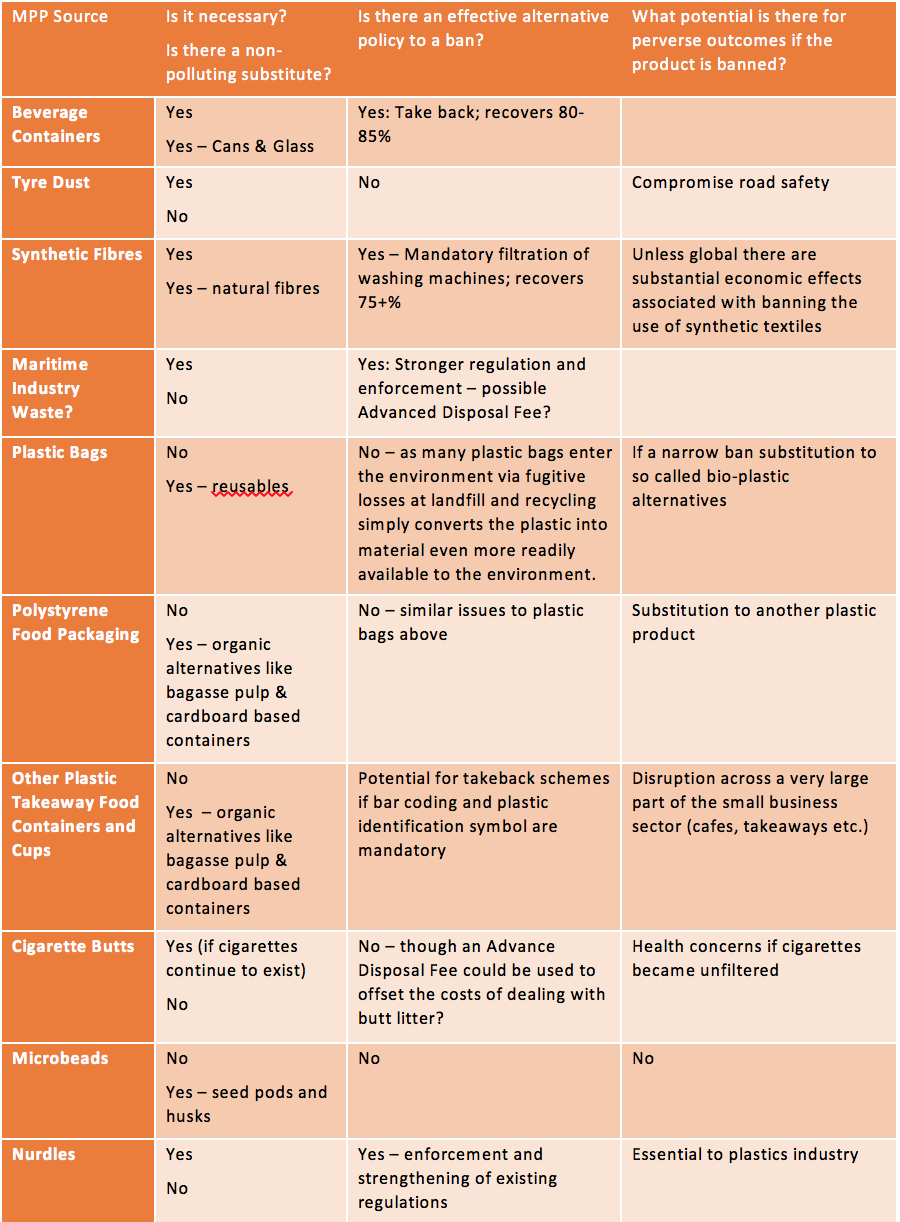 Based on the above it becomes clear that:

In addition to the above there are a range of secondary sources of microplastic pollution that are simply unnecessary and somewhat frivolous – the banning of which will not have a significant impact on society or the economy and should be banned immediately. These include helium filled balloons, disposable plastic straws, plastic 6-pack ring holders and plastic lollypop/ice cream sticks  (timber sticks are a suitable substitute).


[1] Long term exposure to small quantities of styrene can cause neurotoxic (fatigue, nervousness, difficulty sleeping), hematological (low platelet and haemoglobin values), cytogenetic (chromosomal and lymphatic abnormalities), and carcinogenic effects – “Foundation for Achievements in Science and Education fact sheet”. Styrene is classified as a possible human carcinogen by the US EPA and by the International Agency for Research on Cancer.