Threat of Marine Plastic to the Environment

Deadly - The environmental, economic and health threats of plastic in the marine environment.

Over the past 3 weeks we have been explaining the amount of plastic entering Australia and the world’s oceans – millions of tonnes of toxic material being dumped into our seas, contaminating our seafood, devastating our wildlife and despoiling our beautiful beaches and coasts.

But the question is: what is the effect of all this plastic? The answer is: it threatens our lifestyle across a range of fronts.

Estimates on the impact of plastic on biodiversity are hardly precise, as it a very complicated process to try and monitor the diverse range of species but It is well documented (GESAMP 2010, UNEP 2014) that plastic litter causes physical harm to marine mammals, fish and invertebrates and death by entanglement, asphyxiation or blockage of organs are common. It is also known that plastic particles tend to accumulate persistent, bioaccumulating and toxic contaminants such as PCBs, DDT and PBDEs (e.g. Ivar du Sol and & Costa 2014, Ogata et al. 2009).

Late last year CSIRO upgraded its estimates to indicate that up to 90% of all seabirds have already ingested plastics and that the growth rate of plastic production indicates the amount doubles every 11 years. 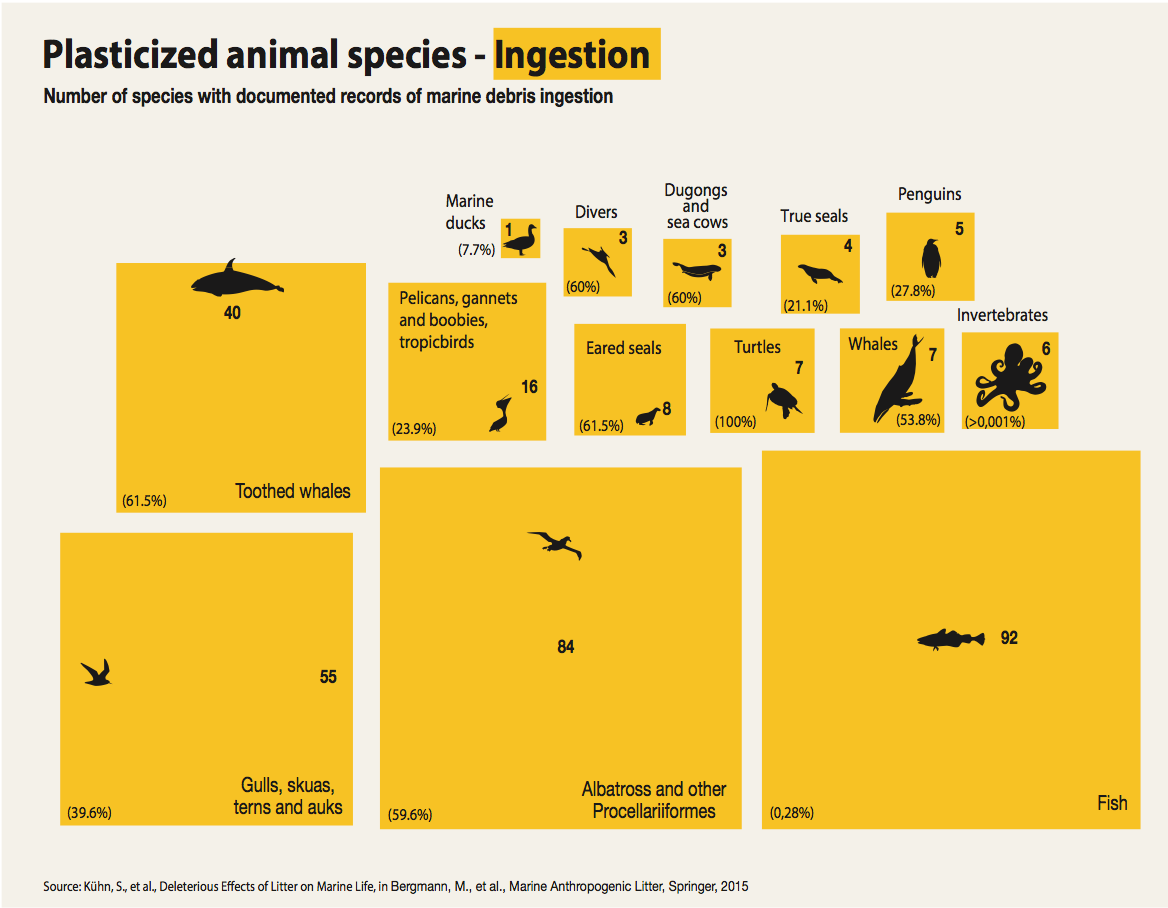 Particles, including microplastics have recently been found in the circulatory systems and other tissues of filter feeding organisms such as blue mussels following experimental exposure, i.e. in organisms low down the food-chain. These particles caused typical inflammatory responses (GESAMP 2014). Very small (nano-size) microplastics have been shown to cross cell membranes, under laboratory conditions, causing tissue damage (GESAMP 2014).

Within marine food webs, plastic debris commonly serves as both a transport medium and a potential source of toxic chemicals such as polychlorinated biphenyls (PCBs), endocrine-active substances and chemicals similar to DDT (often used as an agricultural insecticide). These chemicals are known to compromise immunity and cause infertility, even at very low levels.[1]

The Great Barrier Reef Outlook Report 2014 identified marine debris and plastics as a major threat to the health of the reef. It was found that in the time period of 2008 to 2014, 683,000 items of marine debris were recovered within the marine park. According to a recent study by the ARC Centre of Excellence for Coral Reef Studies, corals digest micro-beads at about the same rate as normal food.[2] Studies have shown that marine litter will tend to collect in mangrove forests, and that such habitats may act as a partial sink for plastics (Ivar do Sul et al. 2014).

In addition to the manner in which plastics act as a toxic sponge, is that microplastics are so small that they have the huge potential to affect virtually all marine life. "When things get that small, it opens it up for 96 per cent of the world's biodiversity, which are invertebrates, to potentially start ingesting them. They can enter the bloodstream through the gut, and then they can circulate in the bloodstream, they can directly enter cells and tissues of these animals," states Professor Emma Johnston, from the Sydney Institute of Marine Science. 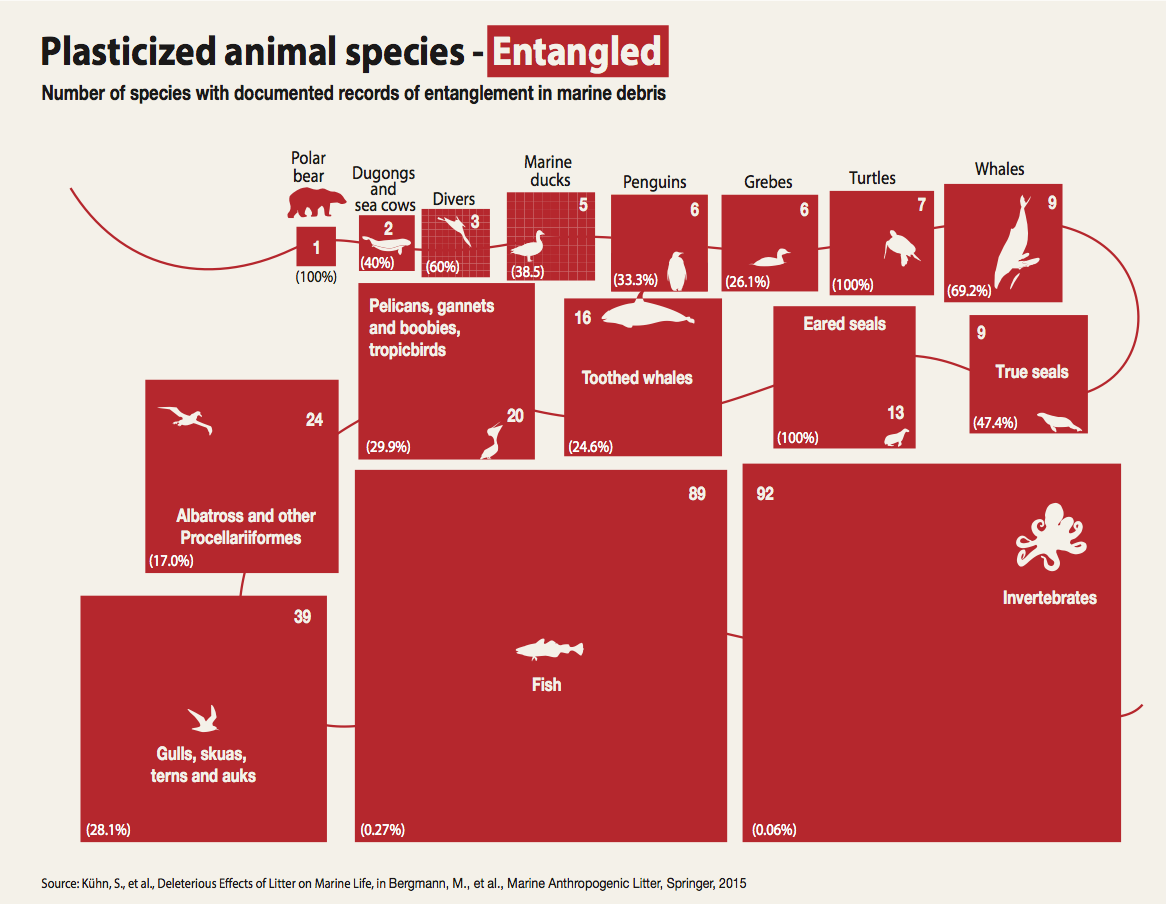 Marine Biologist Dr. Kathy Townsend from the Moreton Bay Research Station, University of QLD, confirms that approximately 30% of the turtles she autopsies have plastics, including plastic bags, in their intestinal tract with a further 6% killed due to entanglement. Marine turtles are particularly vulnerable to floating debris as some species of marine turtles are thought to mistake plastic bags and other items for jellyfish prey.

The UNEP (2014) Report “Valuing Plastics: The Business Case for Measuring, Managing and Disclosing Plastic Use in the Consumer Goods Industry” estimated that 10 to 20 million tonnes of plastic is finding its way into the world’s oceans each year, costing approximately AUD$17 billion p.a. in environmental damage to marine ecosystems.  This includes estimated financial losses incurred by fisheries and tourism as well as time spent cleaning up beaches.

Closer to home, in 2009, Asia-Pacific Economic Cooperation (APEC)[3] estimated that the cost to the tourism, fishing and shipping industries was AUD$1.7 billion. The best available estimates of direct economic damage from marine debris are from two sectors. From data on the marine economy, the damage from marine debris on the fishing, shipping and marine tourism sectors has a value of AUD$1.7 billion per annum in the APEC region. The breakdown of this estimate is as follows: AUD$473 million to the fishing industry, AUD$362 million to shipping and AUD$808 million to marine tourism. 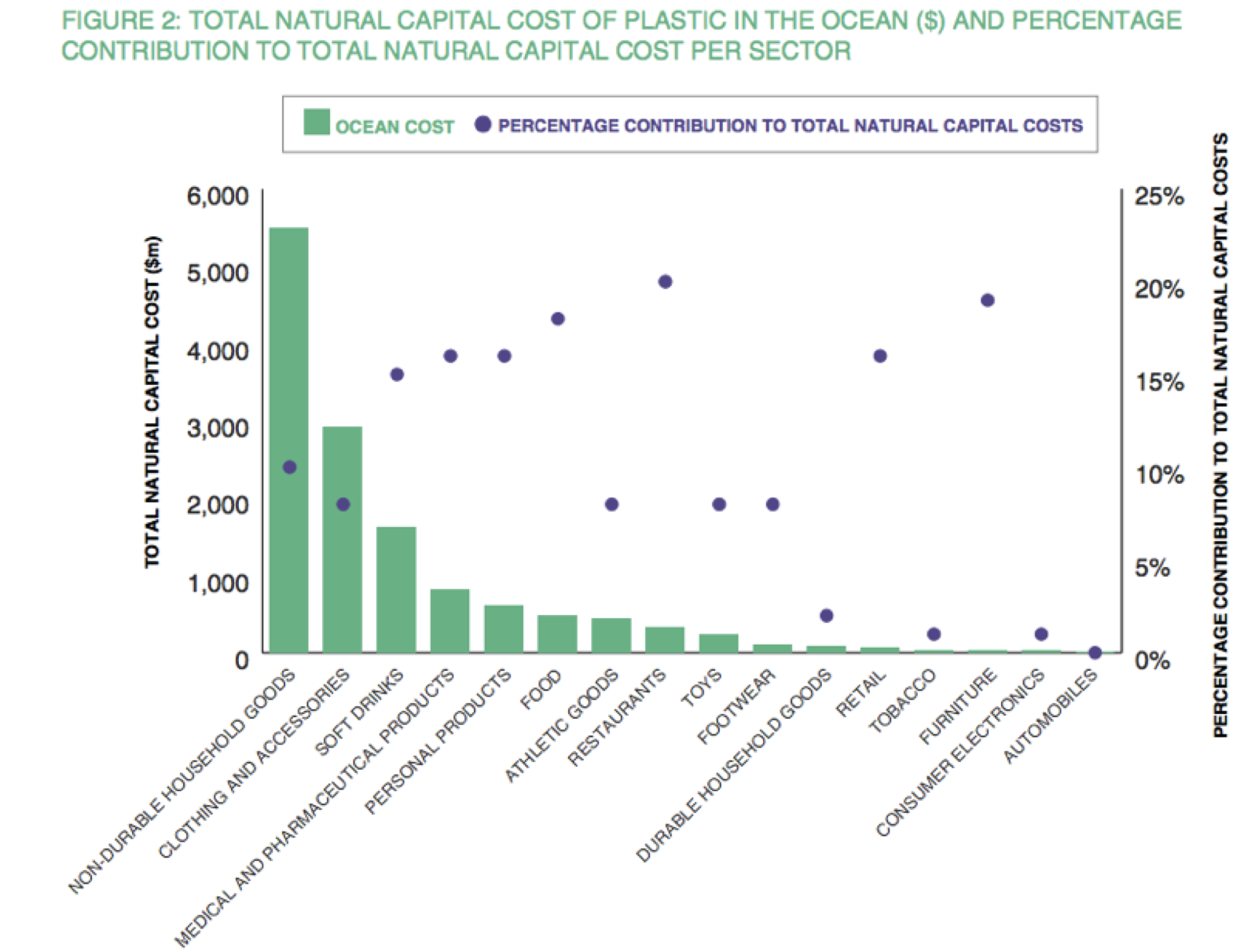 Another major area of cost to the community is in the bill to clean up our mess –local authorities bear most of the cost of cleaning up  litter from beaches, maintaining litter traps and bins etc, which in NSW alone represents a staggering $132 million p.a.

There is growing concern that the high levels of plastic ingestion by marine species is contaminating our seafood. The August 2016 Greenpeace International Report “Plastic In Seafood” identified that, across some 10 international studies, on average 27.1% of seafood was found to contain plastic. While there needs to be a lot more research, these findings create a huge threat to our long term health.  We need to both understand the direct impacts of plastic ingestion, but potentially more threatening, understand the impacts of both the toxic chemicals contained within the plastics themselves and the chemicals sucked up while in the ocean.  These have the potential to cause a range of health problems including cancers, cellular mutation and birth defects.

So Why Haven’t We Acted?

Put simply, the lack of specific action on marine plastic and its major sources has been stymied by our process of regulatory assessment in Australia, which requires an economic assessment to ensure there is a net benefit of any new regulation. This is a notion the writer strongly supports BUT in the areas of marine plastic pollution and waste it is difficult to quantify the impacts on our environment and biodiversity in economic terms. Consequently, it is a narrow approach as currently practiced. Internationally, governments follow the ‘precautionary principle’ to offset this uncertainty. The precautionary approach was discussed at the United Nations Conference on Environment and Development in June in 1992 and adopted as Principle 15 of the Rio Declaration on Environment and Development:

they have caused a range of social, economic and ecological impacts. What is unknown is

the overall quantitative impact, on different social systems, economic sectors or species and

habitats. But there is a sufficient body of knowledge to argue convincingly of the need to

invoke the precautionary approach, in reducing the input of plastics into the ocean and

Until our governments properly incorporate the precautionary approach into our supposed ‘best practice approach to regulation’, the only result we can expect is no regulation at all and ongoing pollution.  Our view is that strong regulatory action is required now on key sources of plastic where such action can have a relatively quick impact.  Further research may indicate additional actions that are necessary.

UNEP (2014) Valuing Plastics: The Business Case for Measuring, Managing and Disclosing Plastic Use in the Consumer Goods Industry