While research has rapidly established that all plastics create problems within the marine environment, the extent of microplastic (pieces of plastic less than 5mm in diameter) now evident in our oceans presents a threat of the highest order to our biodiversity.

“Plastic is so permanent and so indestructible that when you’ve tossed it, in the ocean, or in a dustbin… it does not go away” David Attenborough.

While there is a significant level of uncertainty regarding the amount of microplastic pollution found in the environment, Boomerang Alliance estimates that between 99-130,000 tonnes / p.a. of plastic enters the ocean from Australian sources of which some 32,000 tonnes / p.a. are believed to be primary microplastics. These materials include the synthetic rubber dust our tyres leave on the road during use (potentially 23-24,000 tonnes p.a.); the loss of plastic productions pellets (nurdles) during plastic manufacture (potentially as much as 15,000 tonnes p.a.), synthetic textile fibres lost during laundry (5-7,000 tonnes p.a.); and the discharge of microbeads used in personal care and home cleaning (650 tonnes p.a.). 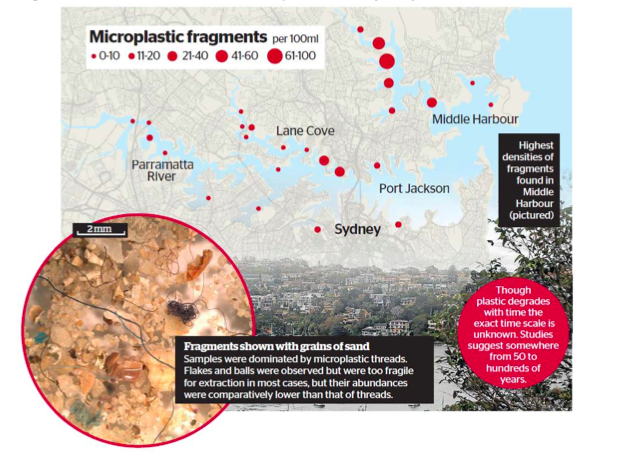 Sediment samples taken at 27 sites across the Harbour found concentrations of microplastics ranged from 0-10 to a high of 61-100 particles per 100ml of sediment in Middle Harbour. (see below)

It is important to address microplastics specifically when developing any Threat Abatement Plan to manage dangerous marine debris. Size matters when dealing with marine plastic pollution – most obviously the smaller the piece of plastic, the more difficult it becomes to capture at the end of its use - with filtration systems needing to screen items with a diameter less than a human hair.  Similarly, while common macro litter items like drink bottles, plastic bags and polystyrene ‘peanuts’ may survive within the marine environment ‘forever’, they begin to fragment into microplastics within weeks of entering our waterways.

The graphic below outlines how microplastics reach our oceans: 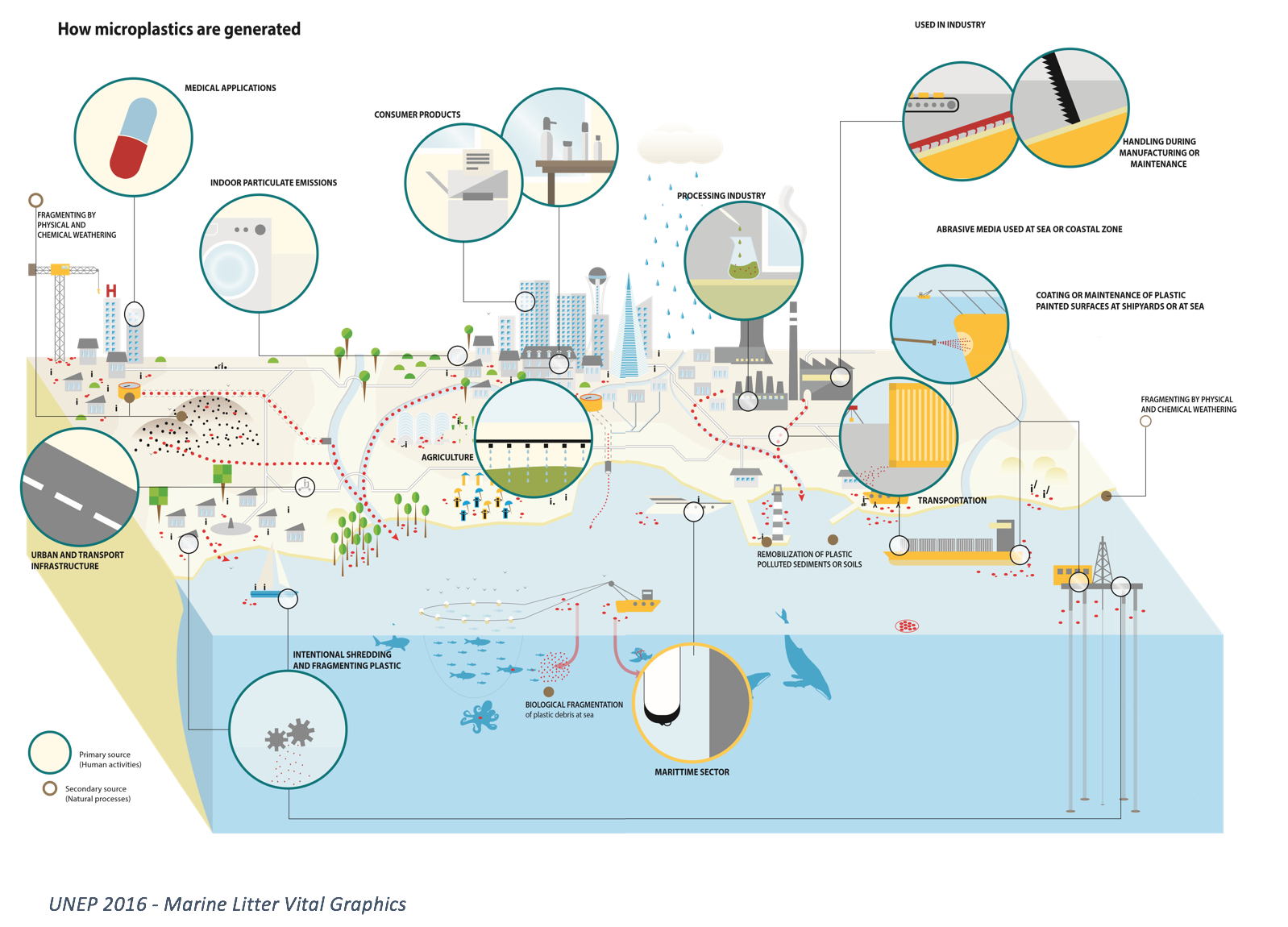 All plastics have similar properties to natural fats, acting as a ‘sponge’ to remove and concentrate contaminants from the water column, but size also matters when considering the potential toxicity associated with marine plastics. Put simply the smaller the piece of plastic the larger the relative surface area to weight ratio. This means there is an increased area of material coming in contact with water – which increases the amount of other pollutants that microplastics will sorb from surrounding sea water. Testing the potential toxicity in fish ingesting microbeads, scientists found that a single microbead can be up to a million times more toxic than the water around it![1]

Finally, and perhaps most importantly, the smaller the piece of plastic the greater the proportion of biodiversity likely to ingest these toxic pollutants – whether directly or by predator species (including us) eating plastic contaminated marine species.

To date, the Australian Government has been slow to respond and while recent announcements regarding Container Deposit Schemes in NSW, Qld, ACT and now WA, targeting the largest source of plastic overall are welcome; the Federal Government needs to move quickly on microbeads.  It has threatened to take regulatory action targeting microbeads and is currently negotiating a voluntary agreement with industry which may apply to both cosmetics and cleaning products.  However there remains no overarching plan to deal with microplastic pollution.

In part, this inertia stems from the great deal of uncertainty regarding the total extent of micro and nano scale plastics in our oceans – yet globally scientists and governments are confident the evidence of the problem is sufficient to act. Just last month in July UNEP released the advance copy of its study “Marine plastic debris and microplastics – Global lessons and research to inspire action and guide policy change’ finding there is sufficient evidence that marine plastics and microplastics are having an unacceptable impact to invoke the Precautionary Approach. This means that society should not wait until there is unequivocal and fully quantified evidence of the degree of impact before acting to reduce plastic inputs to the ocean.

In order to develop an effective Threat Abatement Plan to combat harmful marine plastic pollution there needs to be specific management plans associated with microplastic. These include:

- Regulatory Enforcement – A significant source of microplastics are fugitive emissions from industrial processes. These include the loss of pellets from plastic manufacturing plants; failure of waste facilities to ensure they contain lightweight plastics (e.g. single use bags) within their premises; and the escape of residual plastics and synthetic fibres from recycling facilities. Most recently, Dr Mark Browne of UNSW identified high levels of microplastics in the compost produced at waste treatment facilities as having an unacceptably high level of plastic residuals within the material used as soil conditioners. In each of these instances the plastic releases are unlawful – yet state and territory agencies are failing to ensure our environmental regulations are enforced.

Recommendation: State and Territory Environment Protection agencies must start enforcing regulations. A key component of the Threat Abatement Plan should be to require environmental regulators to publicly report on their inspection, licensing and enforcement activities to ensure fugitive plastics are retained.

- Synthetic Fibres – banning synthetic clothing and textiles from sale is probably a step too far and an impractical solution, but requiring all washing machines to be fitted with filters is a relatively simple and inexpensive solution to capturing the vast majority of fibres being released into our waterways.

Recommendation: Require all washing machines sold in Australia from 1/1/2018 to be fitted with a filtration device capable of capturing at least 80% of the fibrous material discharged during a wash cycle.

- Microbeads – in February 2016 Environment Minister, Greg Hunt announced that if voluntary action did not eliminate microbeads from personal care products, the Commonwealth would introduce regulations (in 2018) to ban their production and importation. This is a good start but the responses is seen as being too slow - just last week RMIT released new research showing the threat of microbeads within our food chain. Lead researcher Dr Brad Clarke said “We shouldn't have to wait one or two years for these products to be banned, because in that time, billions more microbeads will be released into the environment."[2]

It’s essential the proposed Commonwealth phase out of microbeads is focussed on personal care products and other products containing microbeads like detergents, car and floor polishes which dwarf the number of microbeads in cosmetics. In August last year a report for the German Government identified that annually approximately 500 tonnes of primary microplastics composed of polyethylene are used in cosmetic products, with another 100 tonnes p.a. used in detergents, disinfectants and blasting agents and that micro particles in synthetic waxes (e.g. floor and car polishes) were estimated at around 100,000 tonnes per year.[3]

- While the abrasion of tyres during driving is a major point source of plastic pollution it is also important to recognise that this is a necessary evil to ensure road safety. The alternatives (moving back to natural latex) also have wide reaching ramifications for the preservation of old growth forests etc. – meaning that there is no better alternative currently available. To this end we do not recommend any action to eliminate this source.

[3] See: Sources of microplastics relevant to marine protection in Germany

Germany, (2015): Sources of Microplastic relevant to marine protection in Germany

GESAMP: Sources, Fate and Effects of Microplastic in the Marine Environment: A Global Assessment

In order to develop a 'community owned' threat abatement plan to cut 70% of plastic pollution entering our waterways by 2020 we need your feedback and input! Please complete this quick poll to have your say on what issues within marine plastic pollution should be prioritised and help us turn back the toxic tide.

For further engagement on this week's blog content, please use the comment section below - we would love to hear your thoughts.