Sources & Distribution of Plastic in Our Oceans

Dave West exposes the extent of plastic being released into the Australian marine environment.

“There are plastics in your toaster, in the blender and the clock, in the lamp and in the roaster, on the door and in the lock, in the washer and the dryer and the garden tools you lend, in your music amplifier and electric fryer—you have got a plastic friend!”

DuPont: “The Wonderful World of Chemistry” at the 1964 New York World's Fair

In 1964 these words were meant to excite consumers about the new material that would make their life so much easier – 50 years on and we are now understanding how true they were – plastic is everywhere but while it’s been useful - it certainly isn’t our friend.

Plastics have become so pervasive within modern life that in many instances we don’t even recognise the goods we use are plastic (e.g. ‘synthetic’ clothes are 100% plastic, ‘rubber tyres’ contain twice as much plastic as natural rubber). Similarly, over half the plastic pollution generated annually (and in turn entering our waterways) is commonly unidentified as a threat in government studies and policy.

Plastic generates solid waste pollution in every step of its lifecycle: manufacture, distribution, use and disposal. Over time this material will be exposed to weather, be abraded, and fragment into smaller pieces; and while eventually too small to readily see, will persist in our environment as a microplastic (100nm - <5mm diameter) or nanoplastic (less than <100 nm). While there has been much publicity regarding microplastics, nanoscale sized particles are a largely ignored aspect of plastic pollution that represents a major threat.  They are of a scale where they can be directly ingested by plankton and consequently are digestible by 97-98% of the food chain – an issue with real consequences for our health and the seafood industry. 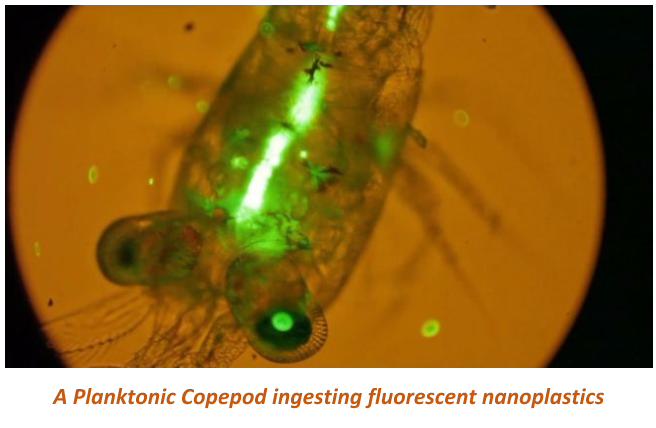 Using CSIRO estimates we believe there are around 124.23million pieces of plastic litter along the Australian coastline (on average 3,461 per km of coastline) and some 34.9billion pieces of plastic floating in Australia’s sovereign waters (our economic exclusion zone less our Antarctic waters). Those estimates don’t include microplastics which have been too small to be captured by these initial studies – shockingly, our preliminary testing from over 100 surveys around the Australian coastline are indicating that there are approximately 60,000 pieces along each km of Australian shoreline – indicating that the true extent of microplastic pollution may be some 17 times higher than CSIRO estimates.

The major sources of microplastics include:

-  General plastic packaging (e.g. bottles and bags) and products that have been torn or broken down into small pieces

-  Microbeads – tiny plastic pellets used in a range of products as abrasives. In particular there is growing concern about the use of microbeads in personal care and laundry products.

Nanoplastics are even smaller particles of plastic pollution. The generation of nanoscale particles is undisputed, but due to the difficulty of identifying microscopic sized materials in our oceans, it has been largely unquantified. Nearly all plastic marine debris will continue to degrade and abrade until they eventually reach a nano scale size. However, there are a number of key sources where the pollution is at a nanoscale size at their point of release into the ocean. These include the synthetic rubber dust released from tyres during their normal use; the release of synthetic fibres during household laundry and cleaning; and the release of plastic dust particles during the use and maintenance of plastic products like exterior paint and plastic coatings. Boomerang Alliance believes there are at least 32,000 tonnes of micro and nano scale particles released in Australia each year – all of which has the potential to reach our marine environment.

While the true extent of marine plastic pollution continues to be better understood, there is still a poor understanding of the overall problem. It is becoming increasing apparent that:

The Australian government’s attempts to quantify our waste streams are notoriously understated and efforts to quantify the amount of plastic consumed and disposed of in Australia have been dramatically understated. The most recent National Waste Report in 2011 estimated that there was 2.188 million tonnes of plastic waste generated in Australia[1]. Yet these reports fail to identify any synthetic products like textiles or even car tyres. Alternative estimates based on the production of plastics in Australia are equally flawed as they miss the proportion of consumption of imported plastic products and packaging.

This is very significant – it doesn’t take an expert to recognise that manufacturing in Australia is declining and subsequently basing an estimate of pollution on local production levels is going to be badly understated. Just last year, Boomerang Alliance finally succeeded in getting the controversial Australian Packaging Covenant to upgrade its estimates to include the plastic packaging that arrives in Australia on imported goods – the results were staggering with the amount of plastic packaging consumed almost doubling from 544,000 tonnes p.a. to over 944,000tonnes p.a. 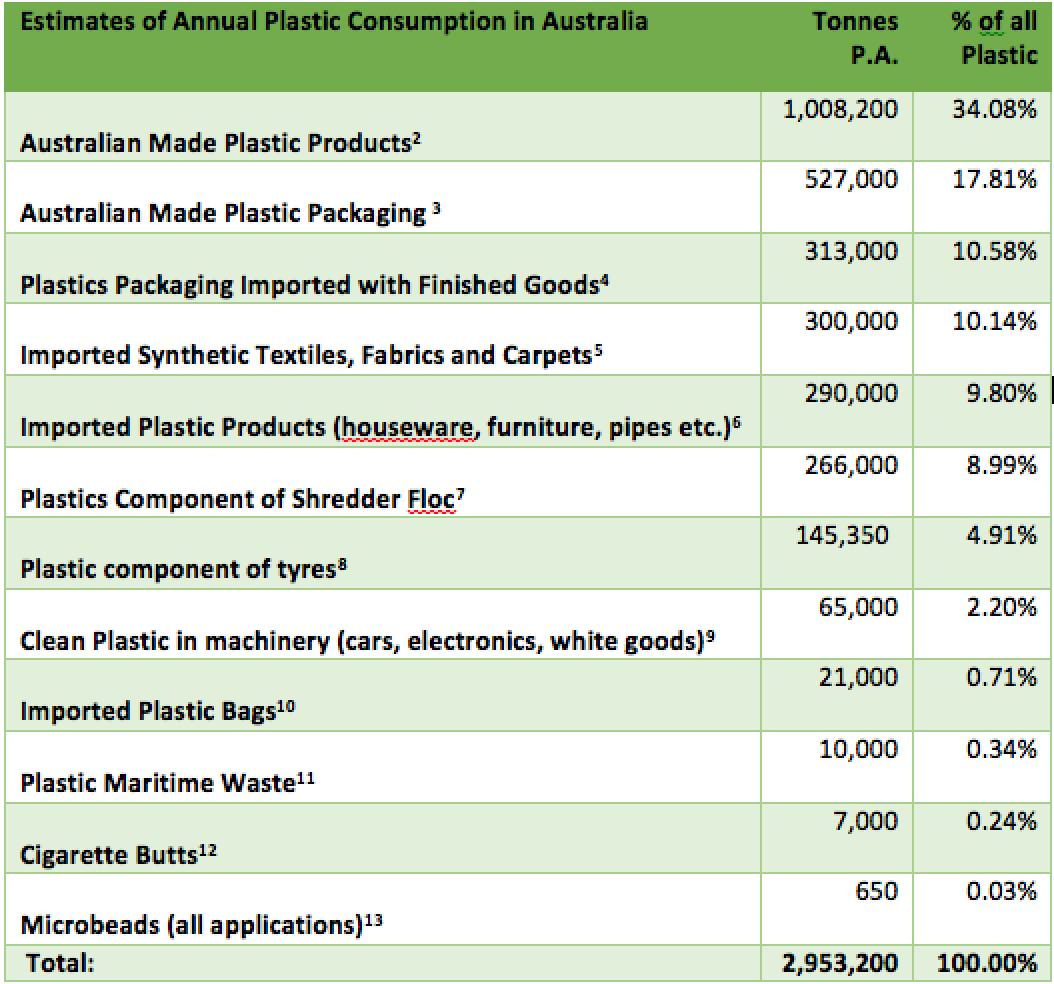 While Boomerang Alliance does not suggest this analysis is exact, it is far closer to the reality than previous government efforts. To check our estimates’ validity, the writer made two simple comparisons (both of which indicate that if anything, our estimates are still conservative):

Which Plastics and Impact?

Having identified the scale of plastic consumption in Australia, the next critical question is what plastics are likely to end their life in our waterways? Theoretically, the answer is all of them – at every stage of their manufacture, distribution, use and disposal, plastics create pollution and over time the lightweight and often buoyant nature of plastics means (without intervention) all or some will be transported via wind and stormwater into the marine environment. To determine the threat (i.e. the likelihood of different types of plastics entering the marine environment) the writer sought to identify the way different plastic pollution sources reach our waters. Once again the purpose of the Chart is to provide a broad estimate not an empiric assessment. 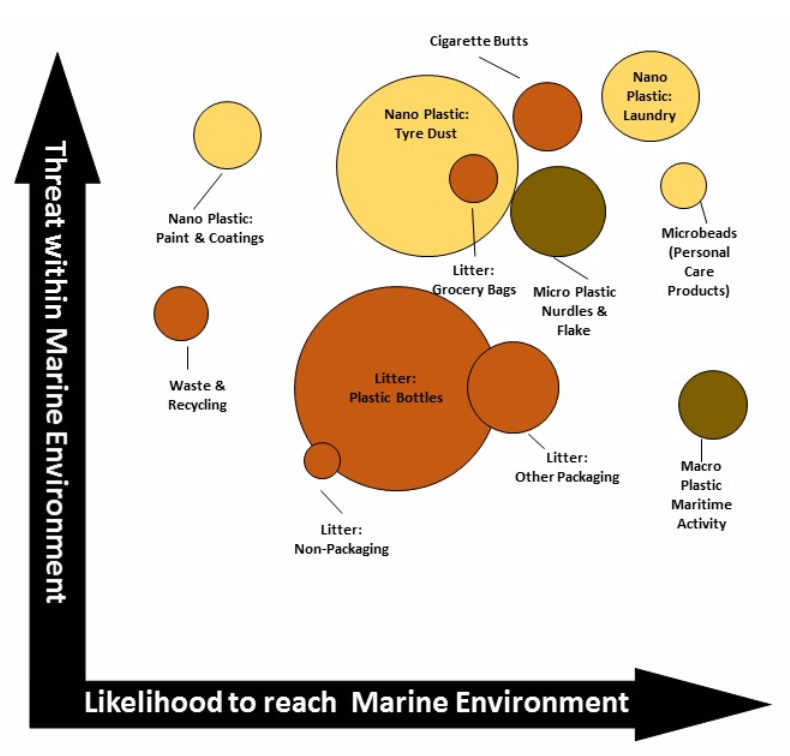 The bubble chart provides a visible representation of the threats of different plastics. The bigger the bubble the larger the pollution source and the higher the bubble is positioned - the greater the threat.  The further to the right, the greater the likelihood the material will enter the marine environment. Based on the data available and using projections developed from the only other paper that is aimed at identifying the levels of microplastic pollution generated (over and above those estimates for debris and litter)[14], we concluded that between 99-130,000 tonnes of Australian consumed plastic has the potential to enter our marine environment each year. It is important to note that this is much higher than other estimates.  However, Boomerang Alliance could find no Australian studies which covered the identified range of plastics known to be polluting our waterways including consideration of:

[11] Extrapolated from the 1996 ANZECC Review of Marine Debris