When it comes to plastic pollution, seabirds are the canaries in the coalmine. But are the two major parties at this election really taking notice?

This weekend The Age and other Fairfax publications featured a major article Plastic-stuffed seabirds sound alarm call for Australian ocean health by Miki Perkins (14 May 2022). Here is the gist of it.

Seabirds are sentinel species, that is, they are an early warning system that can tell us when there is a problem in the environment. In this case, that there is an obvious and growing problem with marine plastic pollution. 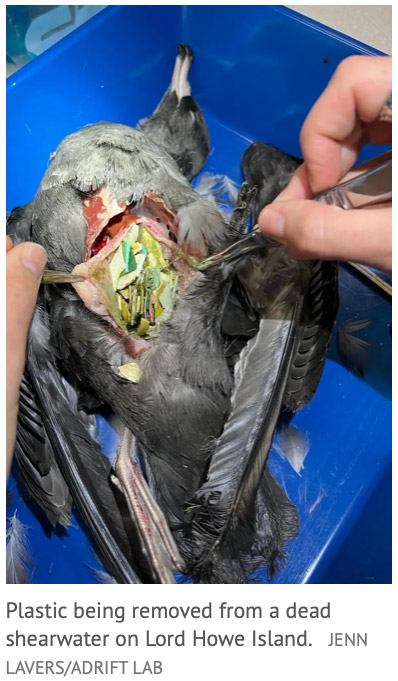 Every year, Dr Jenn Lavers from the Institute of Marine and Antarctic Studies at the University of Tasmania and a team of scientists, research the health of shearwaters on Lord Howe Island.
What they found this year was shocking: in the 100 dead birds dissected this year, only four hadn’t swallowed any plastic.

'One bird had ingested more than 200 pieces of plastic, which is still not a record. Another had "only" eaten 125 pieces, but they were large, sharp fragments that weighed 35 grams – about 8 per cent of the bird’s body mass.'

'It's rare for the plastic to be intact enough to carry a label, but when it does, it often reveals an Australian brand.'

"Shearwaters fly over the Tasman between Brisbane and Sydney, picking up food (often plastics) as they head to Lord Howe island, to nest. They feed the chicks via regurgitation, thinking they are bringing them squid, but they are lovingly feeding their chicks to death,” says Lavers.

This awful problem is being repeated across our oceans.

We draw your attention to this article because as we near the end of a long election campaign, little has been said or promised about addressing plastic pollution by either of the two major parties who could form the next Government.

Both have provided vague promises on waste and plastic packaging but nothing by way of specific new and effective commitments. However, addressing plastic pollution in a meaningful way is the right, and a necessary thing to do.

This is particularly relevant given that both parties have recently supported an International Marine Plastics Treaty. This treaty is aimed at eliminating marine plastic pollution. This election should have been their opportunity to support this critical treaty by spelling out their commitments that will contribute and make a difference to our own marine environment.

In the last few years, it has been the State and Territory Governments who have done all the heavy lifting when it comes to reducing problem plastics. Bans have been introduced on plastic bags and other single use takeaway plastic items. We will soon have a container deposit scheme in every state and territory. What we don’t waste, or litter is a net benefit to the environment, wildlife which depends on it, and the economy.

Now we need the Commonwealth to play their part.

Yes, good things have been done like banning export of mixed plastic waste and investing in recycling, but we remain a wasteful society, something that all governments must recognise. National targets for 2025 have been set, yet both major parties are virtually silent of how these will be achieved.

In 2022, less than 20% of plastic packaging in Australia is recovered which means that over 80% is being landfilled or littered. Is there any wonder that shearwaters are picking up more and more plastics in the ocean?

If our next government is serious about addressing plastic waste, litter, and pollution it needs to have more than rhetoric and vague promises in its policy platform. We need a Government that will address waste at its source and make those responsible for producing single use products also responsible for recovering them.

The Boomerang Alliance and our allies have put forward five key actions we expect of the next Government if they are serious about addressing the plastic pollution and waste.

Whoever wins the election – Boomerang will be making sure they know they have to act to make substantial gains on pollution and waste in the next three years.