My colleague Anthony Lazzaro and I have been up in Byron this week, hosted by the Mullum Music Festival and road testing key aspects of our impending threat abatement plan – what an awesome community this is; surrounded by a spectacular marine park, with a council that have been making huge leaps forward on waste and recycling over the past few year and a community that is lockstep in their determination to tackle the plague of plastic pollution.

Led by Sasha Mainbridge, founder of Mullum Cares, Mullumbimby township decided to eliminate single use plastic bags and a suite of other initiatives as their contribution to this year’s Plastic Free July. 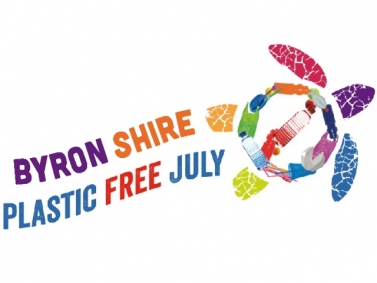 The program has been so successful that they decided every month is now July … with 90% of the town’s retailers pledging to eliminate plastic bags for good. We walked around town thanking the retailers shop by shop and presenting them with a Poster celebrating their achievements. It was such an inspiring morning – not only were the local businesses happy to get rid of bags they were all hungry to know what the next step should be.

Obviously we let them know that a CDS was starting in July next year and unlike Woolies and Coles,  many were queuing up to help consumers with convenient redemption. At least 2 of the major grocery retailers in town Mullumbimby - IGA and Santos Organics (who have both banned the bag of course) are keen to pursue opportunities to install Reverse Vending Machines, a refreshing change after watching Woolies obstruct the rollout of the best practice collection network and continue to lobby against a plastic bag ban.

We then moved into Byron, met the Chamber of Commerce, the peak local tourism body -  Destination Byron, Byron Shire Council and hundreds of locals. In every instance, they were hungry for information and passionate about playing their part to make Byron Shire the first municipality to become plastic pollution free. We visited the local beach clean up hosted by BA ally Positive Change for Marine Life and discussed their community education partnership with council – I was awestruck to hear their stories about patrolling their beaches at night during schoolies week to remind them not to litter (not a job for the faint hearted). 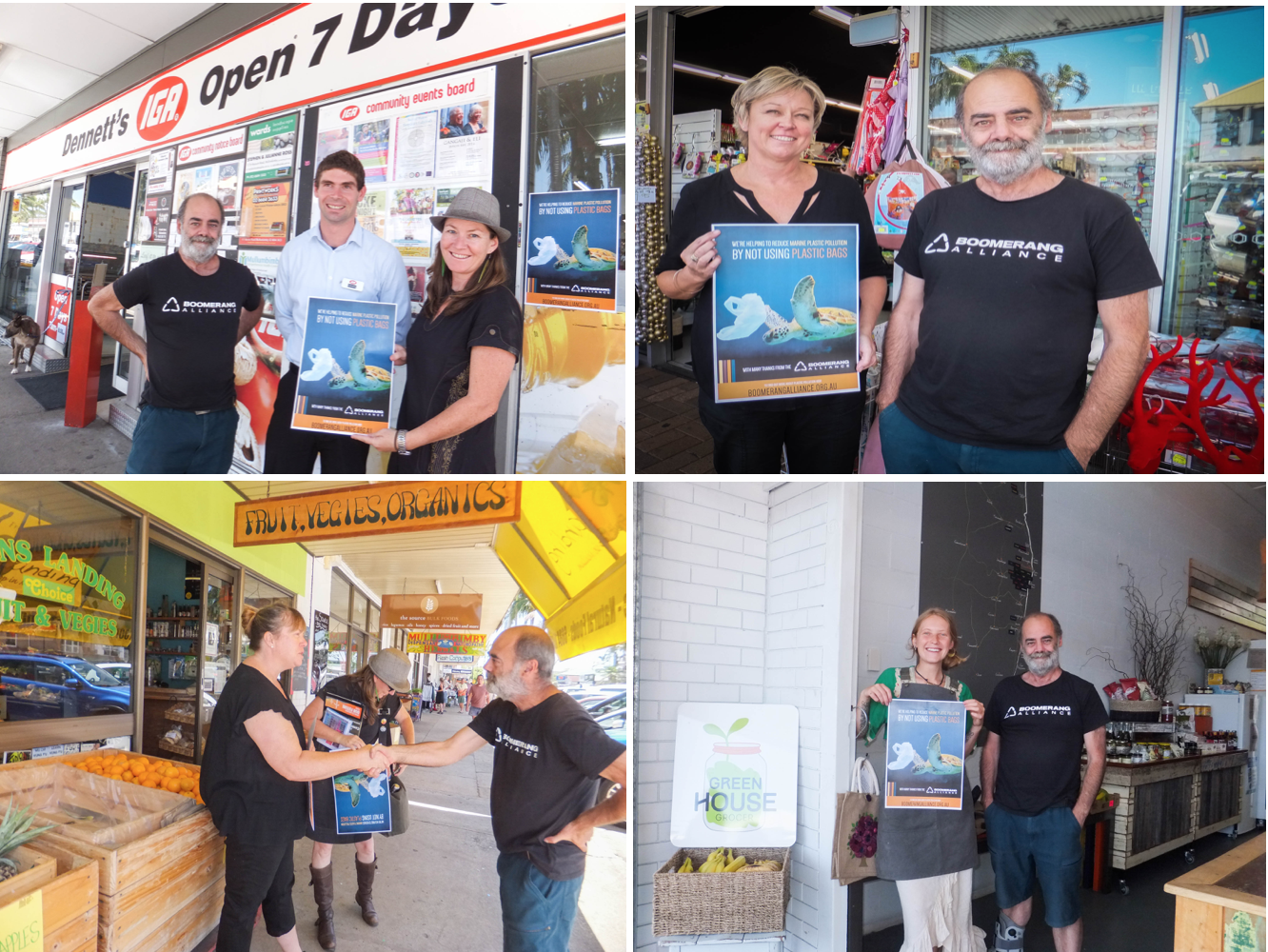 Led by local state MP, Tamara Smith, Byron Shire Mayor Simon Richardson and a newly elected Council already championing a suite of initiatives to cut the shires plastic footprint, we discussed a range of opportunities and challenges and feel confident that, with our support, we’ll be able to create a model for any local community that wants to embrace a life less plastic.

On Monday night we had a packed room when we hosted a round table of all stakeholders where business, council and community groups who were both horrified to hear more about the devastating impacts of plastic in our oceans and discuss local initiates from both BA ally Positive Change for Marine Life and the collective Plastic Free Byron.

The meeting resolved to form a working group to start formalising plans and identifying options to finance initiatives, which Boomerang Alliance will help facilitate and Byron Shire Council generously offered to assist with organising the next steps forward.

While there is much more to be done we’re pretty confident that we’ll soon see the entire shire ban the bag early in the new year and there is a lot of excitement for the Shire to embrace our “Planning for Plastics” approach I discussed in last week’s blog. Some of the initiatives that are firmly on the agenda include:

Of course, as we see in every community there were a few disappointments too.

Even though the surrounding waterways are a vital marine conservation zone the shire has 5 sewerage treatment plans pumping microbeads and other microplastic into the ocean. None of the stormwater outflows have any form of litter trap – there is no way council can tackle those challenges alone and so we’ll be putting pressure on the state government to provide funding to ensure the marine park is protected from microplastic pollution.

Another disappointment was the amount of microplastic we identified in clean fill (rubble and earth – generally recycled from construction and demolition waste) used to stabilise parklands around the main beach at Byron and we saw similar plastic contamination in compost and mulch. Importantly both of these sources aren’t a failing of council or the local recyclers – I was horrified to discover that the NSW EPA (in yet another case of bureaucratic bungling) had issued a resource recovery exemption that requires the processors to ensure they test for plastic but only to make sure that plastic was smaller than 5mm. In other words, the NSW EPA license requires the reprocessors to shred the plastic down to microplastic size -  dramatically exacerbating the plastic pollution challenges associated with recycling).

We also identified a truck carrying 3 skip bins of polystyrene for recycling on the highway from Byron to Lismore -  the truck hadn’t covered the skips bins properly and the tarps were full of rips and holes and was spewing thousands of pieces of polystyrene along the highway. While we are reporting the incident to the EPA Hotline it makes me continue to question whether there is any advantage to trying to recycle polystyrene we’d be much better off banning this terrible form of plastic packaging.

Again, it was so refreshing to see council not hide away from their challenges and have confidence in their determination to tackle these challenges.

Congratulations to Byron Shire and the wider Byron Community – you have earnt our admiration and respect and we’ll do anything we can to support your fantasia effort. 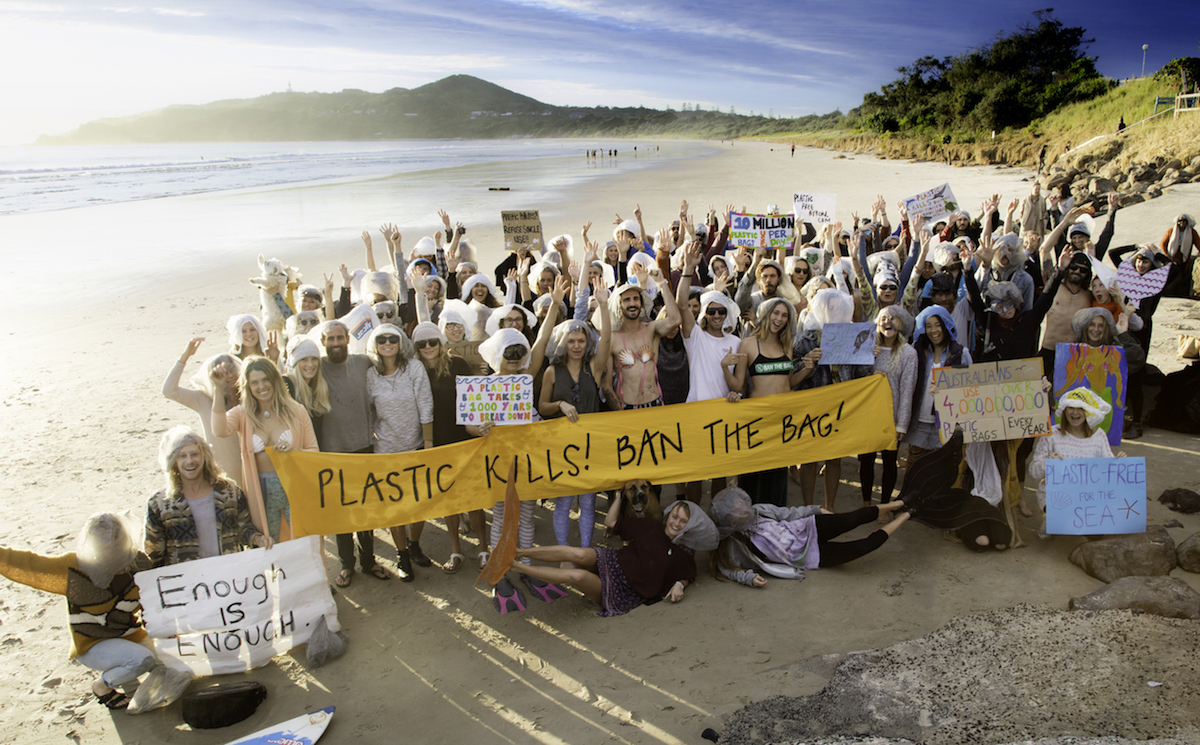 NB watch this space next week when we’ll be releasing the consultation draft of our Threat Abatement Plan – something of a world first in terms of concrete timebound actions to cut Marine Plastic Pollution by 70% within 4 years!