April saw Boomerang Alliance hit the road with a 3 metre-long Coke Bottle on a mission to sway the Victorian government to implement a statewide 10 cents Container Deposit Scheme. And land primetime media coverage on The Project and ABC News in the process.

And within the next six months, WA, Queensland and ACT will introduce their own legislation. Leaving Victorians, along with Tasmanians, unable to reap the environmental, financial and social benefits and rewards.

Boomerang Alliance wanted to learn the views and opinions of the Victorian public regarding the introduction of CDS. The excursion was met with overwhelming support from people and local councils who readily expressed their frustration at the inactivity from successive governments 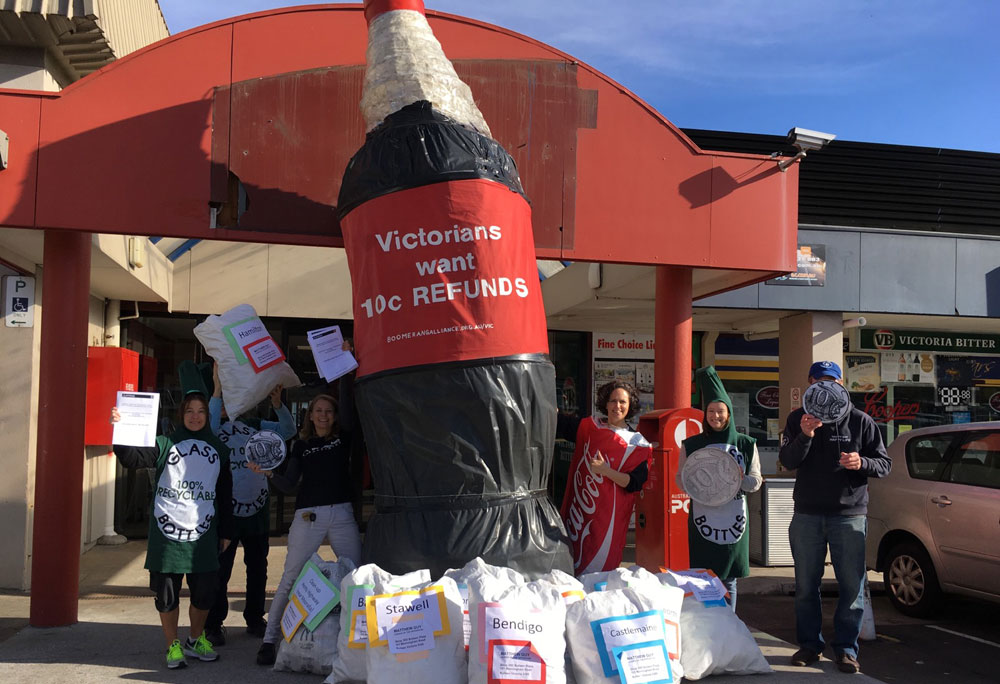 But rather than rely on statistics and correlated surveys, Boomerang Alliance took the fight directly to the people of Victoria in April. Armed with a 3 metre long Coke Bottle, we travelled 2500kms, visited 10 regional towns and collected thousands and thousands of containers - read the Big Bottle Blog here.

We spoke to local and state governments, connected with community and charity groups and spread the message through local media outlets. And ultimately, we were bowled over by the overwhelming message – Victorians are drowning in container litter and demand a Cash for Containers scheme.

In the harsh glare of the China-induced recycling crisis, the Big Bottle tour culminated in May with a special delivery to the electoral offices of Victorian Premier Daniel Andrews and Leader of the Opposition, Liberal MP Matthew Guy. Presenting container litter collected on tour by Victorians residents, the resounding message was loud and clear – Victoria says yes to CDS!

Accompanied by passionate supporters, the demonstration attracted statewide and nationwide media, earning primetime coverage on The Project and ABC News.

With a spotlight now firmly fixed on Daniel Andrews and Lily D’Ambrosio’s inaction, as well as the Opposition’s lack of a CDS policy, our campaign will maintain this powerful momentum and keep applying pressure until Victoria has a 10 cents container deposit scheme.