Six months after Coles and Woolworths turned an almost universal commitment by state and territory governments, to ban lightweight shopping bags, into a marketing coup, the supermarket giants are still trying to claim the kudos, implying that their actions have been responsible for avoiding the distribution of 1.5 billion lightweight bags – but where are the numbers around the thicker, environmentally more damaging plastic bags that have, at least in some part, taken their place? 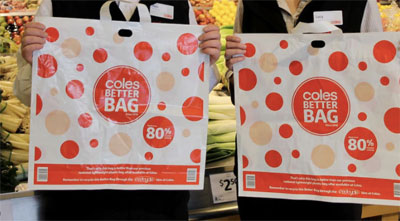 Representing an 80 per cent drop in the consumption of lightweight plastic bags, the release of these figures in December were welcomed in the national press, with the major retailers still trying to take the credit for their environmentally 'responsible' approach.
Only one side of the story is being made public though, with one glaring omission from these statistics that could not be ignored – where were the numbers surrounding the newly-available thicker plastic bags, which retailers are selling at a nominal fee of 15 cents?
Measuring over 35 microns, these new alternatives pose an even greater threat to the natural environment. And spokespersons from Coles and Woolworths refused to directly answer how many they had rolled out since their respective policy changes earlier this year.
It’s a big concern and the run-up to this year’s state and federal election, we will be intensifying our campaign to introduce legislation, removing thicker shopping bags from circulation.
In February, Boomerang Alliance will take to the streets and engage consumers face to face in a survey to gauge the level of direct substitution by shoppers who have absorbed the nominal charge and simply shifted their habit to buying thicker shopping bags.
We plan to distribute these figures publicly and use them to promote an outreach drive encouraging our supporters to push their respective MP’s for national and statewide plastic bag reform.
Watch this space...
PS - If you'd like to help us with conducting our survey, please send an email to [email protected] the more observations we can gather, the stronger our argument will be!