WILL AUSTRALIA BE THE FIRST CONTINENT TO ADOPT CASH FOR CONTAINERS?

The world is finally waking up to the damage that plastic litter and pollution are doing to our environment. We've all seen the pictures – plastic bottles (whole or broken up) floating in the ocean, seabirds feeding broken bottle lids to their chicks, plastic bottles lurking in the sand on beaches, hidden under trees and bushes in parks and stuck in the mud along riverbanks.  Aluminium and glass containers are also dumped in the environment and landfill - it all adds up to an enormous waste of resources.

Litter surveys worldwide show that drink containers continue to make up a huge part of that pollution (40% in NSW), but there is a solution to this problem. It is known by different names in different places, but the simplest way to describe it is (paying) Cash for (the return of empty) Containers… and it works!  Over 40 states and nations across the world are now operating such schemes.

We are aiming for Australia to be the first continent to be fully covered by Cash for Containers.

This problem really began in the 1970s when beverage companies like Coca Cola introduced the 'disposable' drink container, ending the returnable bottle system which had put a refundable deposit on each bottle – known as a Container Deposit Scheme (CDS). As these 'disposable' containers flooded the market, the litter plague quickly overwhelmed parks, waterways and public spaces. The community called for the return of the ‘bottle deposit’ but governments and industry instead blamed the consumer for discarding single-use containers, and they funded anti-litter campaigns instead and shifting the cleanup costs to councils and ratepayers.

What is a Container Deposit Scheme?

Container Deposit Schemes (also known as Cash for Containers, Container Deposit Legislation or Container Refund Schemes) involve the addition of a small, refundable deposit being added to the price of a beverage at the point of sale. Once the beverage has been drunk and the container is empty, consumers and collectors can then return the container to a collection point, where they receive a refund of the deposit. It aims to reduce the amount of beverage container litter and increase the amount of recycling by using a financial incentive (10c in Australia).

Despite what some naysayers might want you to believe, a Container Deposit is NOT a 'tax'. The government does not get the money and the entire deposit is refunded when the consumer returns the container to a collection point for recycling.

What are the benefits of a Container Deposit Scheme?

Container Deposit Schemes have environmental and social benefits. These include:

Currently wine and spirits are not included in the CDSs - we are lobbying for their inclusion.

Which states and territories have Container Deposit Schemes?

South Australia has had a CDS for more than 40 years, implementing it shortly after the national deposit scheme was dropped in the 1970s. As a result, they have one of the lowest rates of container litter and highest rates of container recycling in Australia. The South Australian scheme has been so successful at reducing litter and increasing recycling that the legislation that underpins it was awarded the status of 'Heritage Icon' by the National Trust in 2017. That’s quite a resounding endorsement!

In the meantime, local councils and communities across the rest of Australia continued to fight with catch cries including ‘Bring Back the Deposit’ and 'We Want Cash for Containers'.

In 2004, Boomerang Alliance began another effort working nationally and in each state. There were many twists and turns before we achieved victory in (most) states and territories across Australia. See below to read more about our Cash for Containers Campaign History.

We are still working hard, trying to convince the last remaining state – Victoria – to commit to a container deposit scheme. Once that happens, the whole country will be covered! Given the challenges that Victoria is currently encountering - since China implemented a ban on the import of contaminated kerbside plastics - we're hoping they'll work it out soon before the state drowns under the weight of container litter.

Learn more about Cash for Containers around Australia:

Over the last 16 years, tens of thousands of people have helped our Cash for Containers campaign with letters to and meetings with MPs, signing petitions, media events and actions, community stalls and clean-ups; and we have lobbied governments; countered industry misinformation; and developed a best practice Container Deposit Scheme.

2004 – 05: National Packaging Covenant (NPC) is renewed. It was the weak industry alternative to regulation like a CDS. We fight for targets and succeed – but the NPC was never going to work. Ministers warned a CDS could be around the corner.

2008: WA election. The then ALP Government promises a CDS after a positive taskforce inquiry, but delays a commitment. However, they were voted out. The drinks industry runs an effective insiders and public campaign, threatening marginal seats.

Mid-2010: Environment ministers meet in Darwin under federal minister Peter Garrett and announce a national study… the first of three. Initially, it was into beverage containers including a CDS, but then got expanded to all litter – a common tactic to diminish the importance of container deposits.

February 2011: After a brave campaign by the local community – with our participation – the NT Parliament unanimously passes its CDS law.

January 2012: The NT CDS is implemented.

December 2012: Coca Cola, Lion and Schweppes challenges the NT law in the Federal Court (surely one of the most unpopular corporate actions in recent years).

February 2013: QLD signs up to the National Bin Network – the industry’s latest alternative to a CDS – the day before environment ministers meet to discuss a national regulatory impact statement into options to deal with beverage and other litter. Despite this potentially fatal move by QLD and the industry, the ministers still proceed to the formal review process of a broad range of options including a CDS.

March 2013: Coca Cola win in the Federal Court and cancel their participation in the scheme, hoping it will collapse. However, the NT Government financially backs the CDS by supplying redeemed deposits/handling fees as they seek to remedy the process flaw in the law and obtain mutual recognition from all the other states. Once achieved, there is a full restart in August 2013.

November 2014: As the Vic election gets close, Napthine loses courage, no doubt in the face of bad polls and industry threats to campaign on the (alleged) consumer cost of a CDS.  Also the Commonwealth government ignores calls for national scheme.

However, we don’t give up! We push on – now fully focussed on getting state-by-state adoption of CDS with the Commonwealth path now deemed fruitless.

January 2015: QLD election, an ALP minority government is elected and implements its policy to investigate a CDS. LNP Opposition gives bipartisan support in 2016.

April 2016: The Senate Inquiry into Marine Plastic reports endorses our solutions including demanding all states have a CDS by 2020 – otherwise the federal government should do it for them.

May 2016: We win in NSW with the NSW Government announcing a full scale CDS covering plastic, glass, LPB and metal drink containers.

June 2016: The QLD Government announces it will start a CDS in 2018, harmonising with NSW.

August 2016: WA Government announced it will implement a CDS.

September 2016: The ACT Government announces that the ACT CDS will commence early 2018.

December 2018: The NSW CDS reaches its first birthday and a milestone of 1 billion containers redeemed. Boomerang Alliance releases its report into the first year of operations, which can be downloaded by clicking HERE.

March 2019: The WA legislation passes parliament with the CDS to start in early 2020.

>> SEE ALL OUR RESOURCES ON CASH FOR CONTAINERS

Tell us what you think about our work.
Any questions or comments? We'll get back to you as soon as possible

In 2003 Dave West and a group of passionate people began to campaign for a container deposit system across Australia and decided to create an alliance among all sorts of environmental groups – from surfers to recyclers, to clean up and neighbourhood groups - to give local communities power and influence in their struggle to stem the massive waste of discarded resources polluting our playgrounds, parks, rivers and beaches. The Boomerang Alliance quickly grew from 9 groups and now comprises 49 national, state and local allies. Boomerang is an incorporated association and registered charity.  Each of our allies has the right to their own policies, and decides the level of support they give to our campaigns. 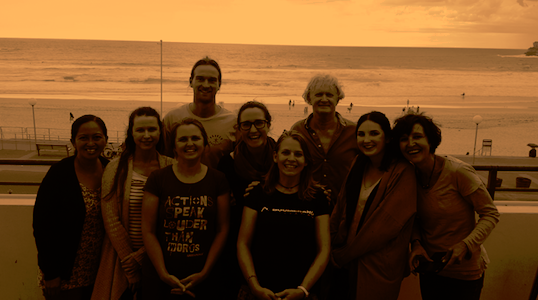 With our campaign and headlines in the last 12 months about illegal tyre dumps and fires, public health risks, fines, clean-up notices and prosecutions – responsible tyre stewardship is now on the agenda. Big changes are coming with tougher regulations and pressure from brands, governments and the community.

Did you know that tens of millions of items of electronic waste, from laptops, to old monitors and TVs and smaller products – are dumped into landfill every year? They contain highly toxic materials as well as rare precious metals. Many other countries have had e-waste recycling schemes for years, but Australia lagged behind with a paltry 17% recycling rate for TVs and computers and much less for other items in 2012. It was just not good enough. 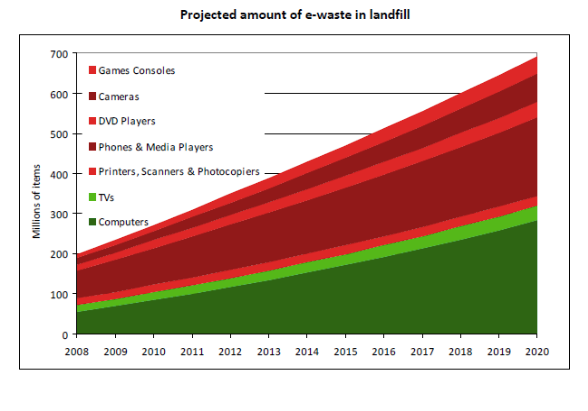 Computer monitors, for example, have lead in their cathode ray tubes, cadmium in their batteries, mercury in the back‐lamps for their LCD screens and beryllium in switches, motherboards and electrical conductors. Mobile phones have nickel in their springs and electrical contacts, flame retardant antimony as an alloying agent, and arsenic in their microelectronics.  These critical elements are highly polluting in landfills where they come into contact with soil, air and water.

Quite rightly many people believe we should be recycling our used electronic items and not discarding them.  Total Environment Centre and other members of the Boomerang Alliance ran a campaign for over seven years which resulted in the introduction of a new national scheme in 2012.  The product stewardship scheme requires all producers or importers of TVs and computers to fund and meet ever increasing recycling targets.

The starting target was 30% - not very impressive in view of the avalanche of e-waste!  It will gradually rise to 80% in 2030.  While welcoming a legally enforceable scheme and the establishment of drop-off centres across the country, we are continuing to campaign for a much better outcome.

The federal government reviewed the scheme in 2015 and has now announced the targets will be increased to 50% (and rising), instead of 37% from 2016 , but it will still be many years before 80%, let alone 100% is achieved. A ban on e-waste to landfill will hurry them up.  South Australia, the ACT and Victoria have instituted bans - check out the Vic policy assessment here.

The government and the industry also expect that local councils will pick up the slack in the interim. This means that ratepayers will pay, instead of the industry. This is not a good example of extended producer responsibility!  We also need to bring other hand held electronic items and batteries into the program.  A new group - EWaste Watch is also active.

>> SEE ALL OUR RESOURCES ON E-WASTE

With an outburst of community support, Boomerang Alliance won the Cash for Containers campaign in NSW, Queensland, ACT and WA! We are also working on an effective plastic ban bag across Australia and other actions to stop plastic pollution.

Donate today and together we will keep pollution out of our streets, our bushlands and our oceans (every donation $2 and over is tax deductible).

Donate online by credit card below or by one of these alternative methods:

People just like you have built the Boomerang Alliance into a powerful force for change.

No matter what your skills we can use them to stop the tide of litter threatening our ecosystems.

Whether you help out in the office, on the street, at community events or from your own home, your efforts will make the difference that could save the environment for future generations to enjoy.